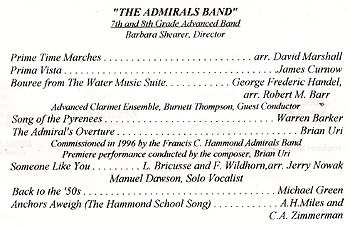 In the winter of 1996, with only six months of composing under my belt, I was asked by a former band director to compose a piece for her middle school band. Although it wasn't my first world premiere (it was actually the fifth), it was the first one triggered by an outside request rather than my incessant attempts to bug band directors who couldn't say no to me. I would later learn that it's HARD to get people to play your music (with the exception of flute solos, because once you've played your first contemporary flute piece, you can fake all the rest of them without much effort, plus you save money by not having to hire a pianist).

Hammond Middle School was a former high school, so their concert attire was an embarrassing approximation of what a sailor might look like in a land where polyester is an undepletable natural resource. The school motto was something appropriately navy, and the school song was "Anchors Aweigh". Having just gone through an unpleasant experience where Warner Brothers Music charged me $50 for the rights to make a crappy pep band arrangement of the Darth Vader theme, and realizing that the school song was in the public domain, I jumped at the chance to work it into the score somehow. 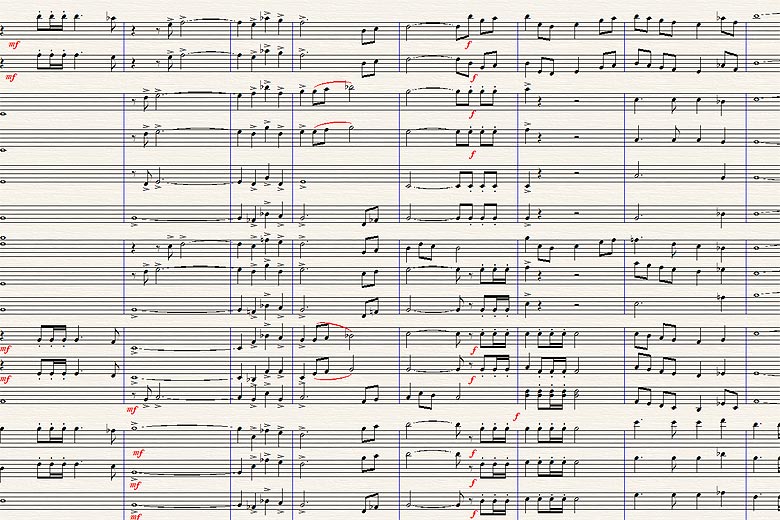 In an obviously original move, I invented a countermelody that could be played at the same time as the school song, and then opened the piece with that theme. I also interjected tiny fragments of the more familiar tune with all the subtlety of Jim Swearingen and craft of an arthritic cobbler.

Because movies are louder than words, especially when they contain eighth graders, you can see the entire performance on YouTube. Pay special attention to the size of my glasses, the way I conduct like a drum major leading a legally blind marching band, the audience clapping prematurely, and the moment near the very end where I knock all the music off of the first flutist's stand.

Mother of 18 surprised by number 19