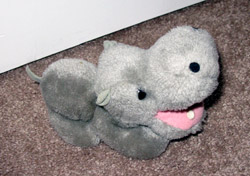 In the halcyon days of my youth (a period after the idyllic but before the tempestuous), I owned more stuffed animals than a taxidermist with defaulting clients. The collection of roughly thirty completely filled up a rectangular laundry basket, and the animals were all shapes and sizes, like the hippo on the left who is surprisingly happy for a mouth-breather and was probably a hand-me-down from my sister.

My stuffed animal collection obeyed three basic rules: none of the animals were given names unless they already had one, they all actually had to be animals, and they could not have any hard shell parts (Cabbage Patch Kids failed on all three counts). And because we lived in a home where good children made their bed up neatly every morning, setup and teardown of the animals became a part of my daily routine. 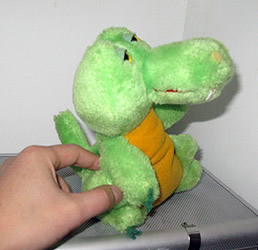 I never really liked this crocodile, but could never pinpoint the reasons why. Perhaps it's because he won't stand up on his own, or because he looks perpetually high -- whatever the reason, he was relegated to the far back corner of the bed, up against the wall. The rest were arranged painstakingly at the head of the bed and in the narrow shelf on either side of the bed, in the exact same configuration each night (and sometimes I would even spell OCD with them). 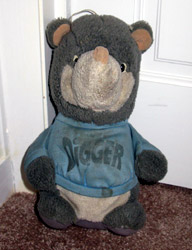 Today, I have very few of these stuffed animals left, and the few that remain sit on a basement shelf, quietly collecting dust and damp to brew some sort of airborne respiratory disease. The most likely vector of contagion might be Digger, the mole from Shirt Tales, who was my favourite for many years. 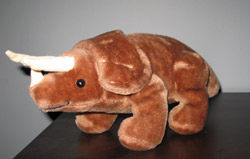 The "Digger, Please" phase lasted until I become obsessed with dinosaurs and received the triceratops from the Natural History museum's gift shop. Triceratops easily outlasted the other animals, staying on the bed even as I grew older and got tired of setting up a menagerie every night.

What was your favourite stuffed animal?

Robber returns to ask for date