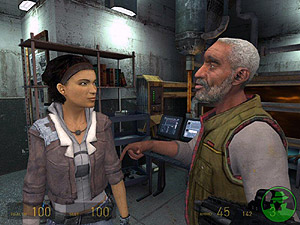 Continuing my trend of playing and reviewing five-year-old games from The Orange Box, I finished Half-Life 2 over the weekend. The original Half-Life (released eleven years ago) was often billed as the greatest game of its time for its storyline, ambience, and immersion, but I was completely underwhelmed by it. Most of that game was spent beating up bugs with a crowbar while walking in a straight line from scripted scene to scripted scene, culminating in a finale that explained absolutely nothing. This is the gaming equivalent of watching Gosford Park.

Half-Life 2 is better than its predecessor, but still not worth the "greatest game of all time" hype that accompanied it. Its strongest suit is world design -- the visuals and attention to detail throughout the world are amazing, and more than worth its extremely low purchase price. Human characters still aren't perfected, but they're no worse than the lifeless mouth-breathers from that 2001 Final Fantasy movie. This is easily the prettiest game I've ever played, and it's five years old. In addition, a fully-formed physics system (which also formed the framework for Portal) makes for great explosions and chain reactions. 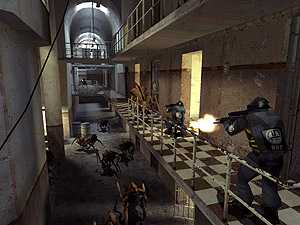 I have simple tastes when it comes to shooting games. Give me some atmosphere, worthwhile exploration, enough of a storyline to keep moving, and lots of adrenaline-inducing action, and I'm set. Some of these needs are met in Half-Life 2, but several areas annoyed me.

Loading Screens: There are no "levels" in the game, because apparently "beating a level" breaks the immersion. However, the game freezes for 15 seconds with the word "LOADING" every time you reach a checkpoint, which is about as immersive as a floater. I actually prefer level breaks, because they give you a good stopping point and make you feel like you've accomplished something.

Lack of a Story: This game has tons of SETTING, but setting is not story. The game (which also doesn't even come with a manual) picks up seven years after the first game, with no great explanation for what has come before. You learn a little as you go, but not enough to make you care about the plot. I often found myself wondering why I was fighting through some apartment building just to get to another apartment building, since much of the initial story motivation seems to be "Get to the other side of the city." The game ends with about as much closure as Locke peering down the hatch in the first season of LOST. I know you need to sell expansion packs, but at least say "EVERYONE DIES" or "DUMBLEDORE KILLS HERMIONE" before you fade to black. 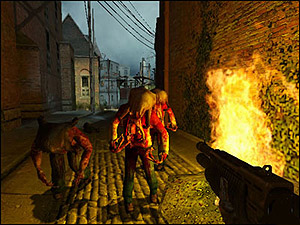 Teammates: I don't want teammates running around stealing my kills, especially when they're more likely to trap me in a narrow hallway and refuse to turn around than kill something. For the most part, I tried to lead them across big flashing landmines (which they were unable to notice on their own), but sometimes you actually have to keep them alive.

Overdoing It: Every single level loading-screen-interlude is crammed with great sequences and enjoyable firefights, but each one crosses the line into tedium. Riding around in a hoverboat was a nice change of pace, but when I was still in that hoverboat an hour later, on a radioactive river that's easily longer than Four Mile Run in Arlington, I was bored. The ratio of really great sequences to really boring ones was about 1 to 1. The only exception was a level towards the beginning featuring zombies in an abandoned little town -- it was creepy, fun to play, and over before it got old.

Bottom Line: Half-Life 2 is a must-play game, but for historical purposes rather than enjoyment ones. It's worth going through to admire the world that Valve created, although it doesn't have the raw fun factor that a game like DOOM did in its time. Final Grade: B

Rodney King vs. the Police, Round 2