Flu Trackers Encourage Patients to Blog About It

Think you have the flu? In some places, you can now go directly to the Internet and report your symptoms to officials eager to spot outbreaks. Say you feel sick, but before you see a doctor you search the Web for information, or blog or Twitter about the flu. Your worries will be detected by companies prowling the Internet for disease trends. 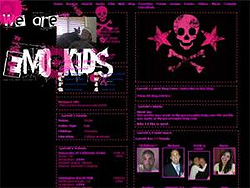 Researchers suggest a preemptive exclusion of Myspace from its monitoring, since the symptoms of being emo or "a member of a thrash metal band that hasn't quite made it big" are textually identical to the flu, resulting in too many false positives.

And someday, scientists hope, this "infodemiology" might help forecast and track a flu epidemic the way experts monitor the weather.

In other words, "mostly inaccurately". Early warning systems will anticipate a high pressure flu outbreak over the greater metropolitan area, which will actually turn out to be a light misting from someone's sneezes.

Google's public Flu Trends system, for example, is designed to pick up early clues by tracking and analyzing Internet searches for flu information. [...] Because people often search for information on the Web before going to a doctor, the system can provide an early warning of trouble [...]

Google has already used this technology to anticipate when other trends will crest, such as the outbreak of STDs ("it hurts when i pee"), the high probability of future nudity from Rachel McAdams ("hot chick nude"), and popular trends in venture capitalism ("mowable marijuana").

Other companies and programs scan live Web chatter for mentions of, or reports about, the flu. Boston-based HealthMap's automated system sends out an hourly Web "crawler" that hunts for flu information in seven languages.

HealthMap administrators ensure that you can opt out of this service by writing "Disallow: /" on your face.

Its creators on Tuesday launched a cellphone application called "Outbreaks Near Me" that can alert users to illnesses nearby. "If you move into a zone where there's an outbreak, your phone would actually alert you," said John Brownstein, assistant professor of pediatrics at Children's Hospital in Boston [...] 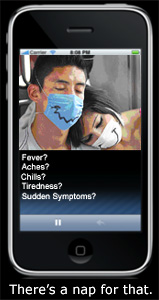 As a public service, Apple has agreed to launch an ad campaign to promote proper flu treatment.

In Singapore, scientists have gone a step further, testing a system called FluLog that could use Bluetooth cellphone technology to locate people who had been in proximity to someone who has become infected.

Cynics have noted that using Bluetooth technology to spread the virus would be more sensible, as it would reduce the number of people wearing those ridiculous earpieces in public.

The CDC currently has a network of 2,500 doctors nationwide that reports flulike illness on a daily or weekly basis [...]. And the CDC issues a weekly public report on the Internet called Fluview.

CDC officials reported being disappointed at the rather bland name of their report, but noted that Floogle, iNfluenza, Yaflu!, TheFluegelhorn, and TheFluperficial were snapped up too quickly by domain name squatters. However, they confirmed that the Spanish-language edition of their report, Fluego, will be online in a matter of weeks.