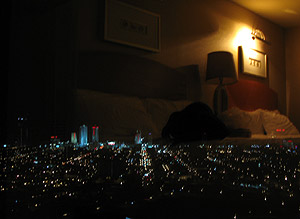 The prelude to Bachelor Weekend started with New York Strip steaks at Jack's house, followed by a random gathering of high-school era guys. We tried out Jack's recent purchase of Beatles Rock Band and learned that trying to sing along to "Within You Without You" is a retarded proposition. Later on, we switched to poker, except for Chris Sharp, who switched to poker and Scotch (resulting in a massive depletion of both reserves). I conceded and came in second, winning $10, though I might have gotten first had it not been 3 in the morning. 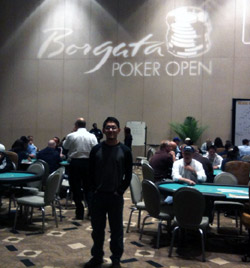 Following a breakfast of chocolate chip banana pancakes, the three of us, Ben, Jack, and myself, got on the road for a trip to Atlantic City, which would be my first trip to a casino where I was old enough to touch anything. (To clarify, I'm talking about gambling machines, although I suppose other interpretations could apply).

We arrived around 1 PM and picked up Mike (of Mike and Chompy) who had flown in from Boston so he could lose at blackjack. The next step was to locate a cheesesteak shop which we ultimately determined did not actually exist, so we ended up at the Whitehouse sub shop. Their cheesesteaks were delicious, but this was probably because we spent an hour in line at near-starvation levels before finally getting them. 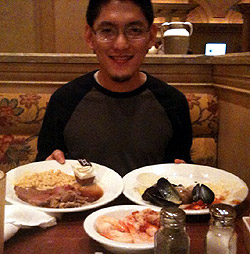 After checking in to our room on the 37th floor of the Borgata (which I kept calling the Bogota throughout the weekend), we took a quick power nap and then signed up for a single table of poker in the Borgata Poker Open. Though there were many high-rolling events going on, we played it safe with the smallest one that had a $100 buy-in. Unfortunately, they gave out one too many stubs for the game, and Mike was unable to compete. The rest of us didn't completely suck though -- Jack came in 6th, I squeaked in at 5th, and Ben walked away with the top prize of $700.

We celebrated in the high-class buffet, where I had a completely balanced dinner consisting of sushi, raw shrimp, fried shrimp, mussels, clams, macaroni and cheese, prime rib, lo mein, and multiple chocolate mousses with chocolate playing cards on top.

After our dinner, we ambled around the casino paying our stupid peoples' tax into various video poker machines and noticing the ridiculous number of coeds who had come to the casino solely to enter their $25 cover nightclub. There must not be a lot to do in New Jersey. I made it to around 2 AM before retiring for some sleep, but the others were out until 4 and even 5, trying their luck at dealer games.

On Sunday, we dropped Mike off in Philly after Ruby Tuesday burgers, because his previously purchased flight would have sent him home to Boston by way of Orlando and possibly Arizona. The remaining three of us finally made it back to Virginia around 3, and I got home around 5. My activities for the evening included cat-feeding, laundry-doing, and twelve hours of sleep.

All in all, it was a successful trip, and we even found a reason to go back a week after the wedding.

The ridiculous manpower behind World of Warcraft

Get Out of Jail Free: Monopoly's hidden maps