the back-to-school edition, or if you're old, the keep-on-working edition 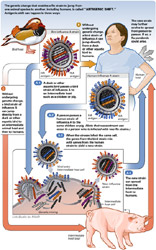 ♠ Health officials in the US are warning that we're going to see a 2nd surge in swine flu cases during the fall flu season. In general though, the even-numbered periods of disease are only dangerous for minorities. As they say, "white people only get the clap on 1 and 3".

♠ The Clap was one of many ailments I didn't fully understand when I was a little kid. Back then, I thought that shingles sounded like a very painful pooping problem, and elephantiasis made your face look like an elephant. 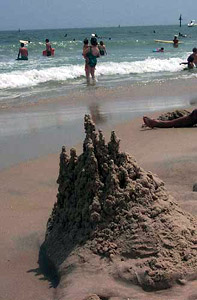 ♠ Elephants are also in the news in France, where a mayor is trying to ban them from being on the beach because the presents they leave behind are a little too big. I'm sure that elephant pies would be a great mortar for sand castles though -- they should host a sand castle competition to capitalize on dung. And if the elephant has to pee? Instant drip castle.

♠ Drip castles always seem like a lost cause to me. You have to build them too close to the surf so you have a ready supply of drip, but then the tide comes in and you immediately lose your supply of castle. I suppose the optimum sand castle would be reinforced with interior walls from a Lego Castles set. 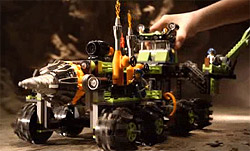 ♠ I just glanced at the Lego website to see what sort of sets they sell nowadays. The days of monosyllabic "town" and "space" sets are now overloaded with a smorgasbord of proper nouns and phrases. Power Miners looks like leftover propwork from the movie, Labyrinth. And do we really need a Spongebob Squarepants Lego kit?

♠ Plans for the weekend include a meeting with the caterer, a Happy Hour with Rebecca's job, and maybe even some relaxing time, which has been about as rare as my steaks recently. We also started the third season of Dexter on Tuesday, and have seven episodes left -- that'll probably be done and ready for borrowing by the end of the weekend.