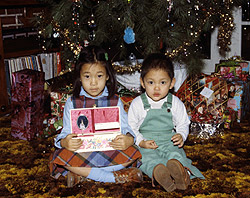 Every family has their Christmas traditions (even the Jewish ones who bemoan the fact that everything's closed on Christmas Day). The Uri! household traditions were fairly tame -- we did not construct ear wax candles in every window or go a'carolin' in four-part Hi-Lo's harmony, but we did go through the same motions every year for many, many years.

A Uri! Christmas began with a tree, much like the French phrase, tr?s bien, when pronounced by a redneck. In the early years, we'd always shuffle off to the live tree lot for a giant, misshapen natural tree with all the roots still on it. After the holidays, it would get a ceremonial berth in the backyard where it would survive for about ninety-seven days before gaining a Patrick Henry complex and promptly dying. Later on, we went for the economic route of a fake tree that folded up into a box and had the lights permanently attached. 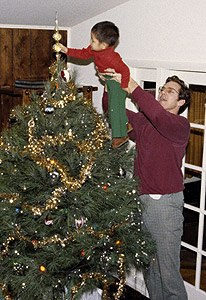 Once the tree was up, my sister and I would place our collection of eight thousand ornaments on the tree. Seven thousand, forty-two ornaments were given to us by the elderly lady who lived next door to us and kept trying to invite us over for conversation when she was bored (because talking world politics with a seven-year-old was preferable to being alone), and the other nine hundred fifty-eight ornaments came from the very unfortunate day when Red Apple ornaments were on sale at Walmart -- it's true that "50% off" ornaments bought on the day after Christmas are a real bargain, but the sheer volume of Red Apple ornaments that were left behind by shoppers made our plastic pine tree look like a very confused orchard transvestite.

Once all the ornaments were on (except for the two additional boxes of Apples we hid under the couch), my mom would move them all around so they were more evenly spaced around the artistic palette that was the tree.

The final piece of the Christmas Tree package was the topper, alternately called the crow's nest or the masthead, usually by idiots. Fairly early on, we had a five-pointed star that blinked on and off like the motel sign for a Super 8 Motel in Davenport, Iowa. When my mom complained that it made our house look like the Bates Motel, it was upgraded for a really creepy battery-powered angel that moved its arms up and down like it was running a marathon through molasses.

Next came the atmospheric extras, in the form of hanging sleigh bells that pissed everyone off whenever the door was opened, a kiln-fired church that I painted yellow with red trim (because the best churches are run by Asians in Annandale), and an Advent calendar covered in Hershey's Kisses that you could stage rehearsal Christmases with by eating the chocolate and tying a new one on before anyone noticed. 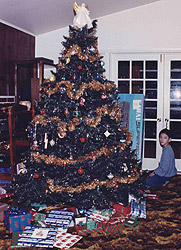 When Christmas Eve finally rolled around, we'd set out a plate full of sampler cookies from the metric ton of Christmas Cookies made in the days leading up to the holiday. I never got into the whole cookie-making scene, because we'd churn out scads of peanut-butter, oatmeal, and sugar cookies, but we'd never make a single one of the only true cookie: chocolate chip. Apparently chocolate chips don't figure strongly into any Christmas mythology, other than the time Rudolph really had to "go" after an Indian dinner at Dasher's house.

Christmas Day started as early as possible and involved far too many presents for any one child to experience. While it was definitely fun to get so many presents, I'm sure we could have donated a couple to other families and still felt perfectly happy. I remember meeting Anna for the first time in college, hearing about the time she got a lima bean for Christmas, and wondering if maybe we were spoiled. In one year, I think I got the complete complement of He-Man action figures. In another, I got one of every ____ Quest computer game by Sierra On-Line, and spent the rest of the day rotating through King's Quest V, Space Quest IV, Police Quest III, and the Adventures of Willy Beamish, in hopes of giving equal time to every game.

Once the presents were opened, the family portions of Christmas were mostly over. Each family member would retreat to enjoy their gifts in peace, and my mom would start cooking an Austin-Texasly obese turkey (I didn't even realize they sold turkeys under eighteen pounds until post-college). We'd eat the neck meat and then have Christmas dinner as a family, sometimes with the grandparents and the uncle, and occasionally inviting random single people over who had nowhere else to go.

And in the days after Christmas, I would enforce my personal tradition of not eating leftovers for at least two days after the original meal. Leftover turkey blows.

Alumni with 2.7 GPA sues college for not finding a job

Raising children in 2009 will bankrupt you