Following an afternoon meeting on Friday where I met with our caterer to make sure she knew that we were still getting married and wanted to eat wedding steak instead of wedding cake, I returned home for a couple more hours of Friday evening work. The phenomenon of things going wrong at work late on Friday seems to be increasing linearly over time. Had I been elected in 2006, my Three Day Work Week initiative would have nipped this problem in the butt (because problems don't have buds). 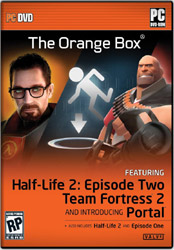 I also picked up a copy of Orange Box, a collection of five top-rated games which actually came out two years ago. It's okay to be outdated though since this is the first PC game I've bought that's not a World of Warcraft expansion in several years. Despite a cover that looks like it was designed by the Virginia Tech poster department, the games I've played are pretty entertaining so far. 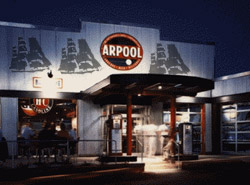 On Saturday evening, we dodged Hurricane Bill for a CustomInk social at the uselessly-named Carpool in Arlington, which would be a better b(ar) if they dropped the "C" and made it pirate-themed. We had free wings which were spicier than my dance moves, and pulled pork that will probably make a full recovery.

Sunday was densely-packed, yet lazy, not unlike a glacier. Besides bouts of wedding work, exercising, and finishing the third season of Dexter (which I enjoyed, although I was underwhelmed by the last episode), we also tried out a new chain, Mimi's Cafe, for a delicious dinner. I had a cup of chicken noodle soup that mixed the best of both brands: the tasty broth and fake chicken of Campbells with the noodles of Progresso. The soup was followed by a half-rack of ribs that effortlessly peeled straight off the bone, and a bowl of chocolate mousse dipped in strawberry sauce.

News of the Weird: Donald Duck the philosopher and oral sex for potato chips