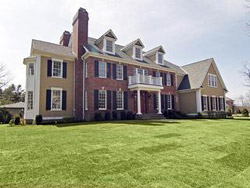 Birch Hill is a majestic property of tender grasses and low stone walls and a whimsical sculpture next to the swimming pool. To the untrained eye, the long economic downturn as viewed from here and beyond [...] has been hard to see or feel. [...] Laura Steins doesn't mind saying that she is barely squeaking by on $300,000 a year. She lives in a place where the boom years of Wall Street pushed the standard of living to astonishing heights. Where fifth-graders shop at a store called Lester's that sells $114 tween-size True Religion jeans. Where a cup of fresh spinach and carrot juice called the Iron Maiden costs $7.95.

As a vice president at MasterCard's corporate office in Purchase, N.Y., she earns a base pay of $150,000 plus a bonus. [...] She receives $75,000 a year in child support from her ex-husband. She figures she will pull an additional $50,000 from a personal investment account to "pick up the slack." The nanny and property taxes take $75,000 right off the top, but Steins considers both non-negotiable facts of her life and not discretionary. When she bought out her husband's share of the house after their 2006 divorce, she assumed the costs of keeping it afloat -- $8,000 to $10,000 a month. There's a pool man, a gardener and someone to plow the snow from the quarter-mile-long driveway.

Life in this $2.5 million house was built on the premise of two incomes, not the income of a divorced mother of three in a tanked economy. [...] As tight as money is, she has decided that living in a 4,000-square-foot house on three acres is the practical thing to do. "A), I couldn't sell the house right now," she says, citing the slow real estate market. "B), this is where my kids go to school. And C), it's where my job is."

Week after week, Steins and others in a group called the Stephen Ministry wrestle with how to help members struggling through the crisis. [...] Steins's group is ready to lend support to church members, but the problem is there aren't many takers. One member articulates the challenge. "There's an image people are invested in that makes it hard for this to be talked about," says Bob Steed. 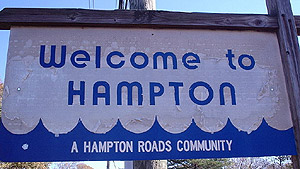 On a weekend when the kids are with their dad in Manhattan, Steins packs her overnight bag, ditches her Volvo SUV for her Pontiac Solstice convertible and heads for a party in the Hamptons. [...] Steins violated her no-shopping rule by buying a new black sweater at Ann Taylor with a 20 percent off coupon. [...]

The party turns out to be spectacular. Champagne and oysters and shrimp followed by a seated luncheon for 70. Steins joins a small group back at the birthday girl's house for a casual supper of lobster bisque. [...] On her way out of town, she window-shops and stops at a boutique to buy a birthday present for a friend. She admires [and purchases] a $30 set of bone bangles on the counter.

At night when it's quiet, way up the quarter-mile driveway, Steins knows how fortunate she is. She has a job. She will gut out the remains of the recession, even if it's her version of paycheck to paycheck. She will keep it all afloat. [...] "We might live in nice houses and drive nice cars, but we're just holding on," she says. Perfect looks perfect from a distance.

Rat-eating plant discovered in the Philippines