On Friday evening, I passed up the bass-thumping night life of the Reston Town Center to put the finishing touches on the Ormond Stone Middle School Band website, which is sure to revolutionize the way Centreville middle schoolers read about their band, and may also cure kidney stones. The old version is still up for comparison as well. 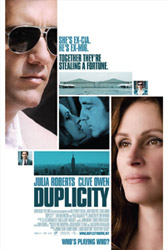 Saturday involved a trip to Lowe's for a propane exchange, because running out of propane on a Steak Night would be calamitous, and then the installation of a new spoon rack. I also finally finished the first season of Breaking Bad (to be reviewed on Thursday), put in a few hours of work-work, and then attended a barbeque at my boss' house in the middle of a gigantic monsoon. I also learned a new barbeque trick: when it's storming, don't put the beer cooler outside.

We got all sorts of errands accomplished on Sunday including the shrinking of my wedding band so I don't Jay-Chin it across the room during a staff meeting, and the purchasing of a wedding gift for another couple, whose single silver picture frame on Crate and Barrel costs more than our entire reception. We then made some aromatic Chicken Cordon Bleu for dinner, using the meat tenderizer that Katie Morton bought for us.

After dinner, we watched the movie, Duplicity, a heisty movie which was a little slow to start, but was surprisingly easy to keep up with and ended well. Clive Owen is still mostly a tool though. Final Grade: B