The URI! Zone turns 13 this month, so it may grow hair in unexpected places and become interested in kissing other blogs. If nothing else, my site will always be older than Google, and in another year, it will have outlasted the entire lifespan of Geocities, the free web host of the 90s.

The new changes for the Fourteenth Edition are minimal because I've been busy with work, writing games, playing games, and planning weddings. Most salient are new avatars for anyone that posts regularly, additional calendar pictures, and an updated banner at the top which is more artsy and less utilitarian. (It can double as a low-budget Rorschach test in a jiffy). I would also like to note that it is a banner, and not a masthead, simply because I dislike the word "masthead", which sounds like someone who's a big fan of playing with himself, and probably wears an giant, unfortunately-shaped foam hat celebrating his pastime. 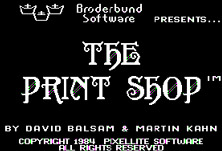 Speaking of banners, remember the program, "Print Shop", from the 1980s which let you create signs that stretched across a roll of dot matrix printer paper? You could choose from a selection of three beautiful fonts, and then stamp the banner with a horribly pixelated graphic of a puppy that more closely resembled an acid-corroded mushroom. I was a master of Print Shop, even going so far as to make a 4 x 10 tile banner for the Student Government campaign of Allen Lutz in seventh grade (he lost).

As this year progresses, I'm going to try to bring back regular Memory Days (like the preceding paragraph), even though it's so much easier to write a list of types of sheep and call it a day. In order of effort, from greatest to least, I'd say my updates are ordered: Newsdays, Memory Days, Musedays, Weird Search Days, List Days, Fragments, Reviews, Weekend Wrap-ups, and finally, pictures of sunrises or Kathy's cats in a taquito. 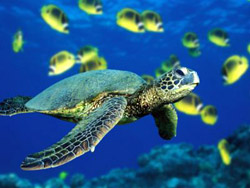 However, 2009 will also see further interruptions in the regular schedule of giggles and vittles, since I'll be gone for two weeks in October to visit the noblest of the scantron race bubbles: The Pacific Islanders. They were always lumped in with the Asians on standardized tests, because there weren't enough of them to have their own bubble -- at the time, the two added up to one minority (much like stacking a major and minor second), and now we get to go to Hawaii and visit them in person. What this means for you readers is that you'll have to find another site to pass the work day while I'm sleeping in my deluxe oceanfront room with a sea turtle.

There really isn't anything else flashy to advertise unless I defrock, so I'll close by saying, thank you for making the URI! Zone (with its 1,993 news updates and 4,892 reader comments over the past 9 years) the number one BU-based destination on the Internet!