we put the fragments in Fridfragmentsay 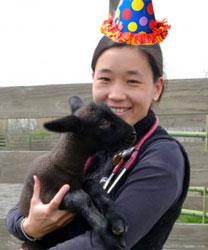 ♠ Today is my sister's 33rd birthday, and in an effort to be Green and reduce landfill JPEGs, I'm reusing the birthday picture from last year, in which she was apparently "on the lamb". Happy Birthday! This also means that there's only thirty-two days until I, myself, turn thirty.

♠ There aren't a lot of new milestones I'll have reached by the time I turn thirty, since I already own a house and eat regularly at Popeyes. I even Googled "age thirty milestones" and found this unintentionally amusing excerpt published by the Institute for Christian Economics. The main points I learned from this article were: "A retarded person is not expected to become intelligent through education or any other means." and "The worst offenders on earth in this regard are Japanese men."

♠ At the very least, my car insurance might go down a little bit more, but probably not after my new speeding ticket is processed. Apparently going 47 in a 35 on Sterling Boulevard is a ticketable offense. 84 in a 65, I can understand (not that I EVER did THAT on I-66 E outside of Manassas in 1998), but twelve miles per hour over the limit on a two-lane ribbon of construction trucks and minivans is well within the divine purpose of that road.

♠ I'll have to be extra careful when driving our rented convertible on our honeymoon, since I've heard that the Hawaiian police are very strict about going slowly -- not only do you get a ticket, but your character might be written out of the next season of LOST. 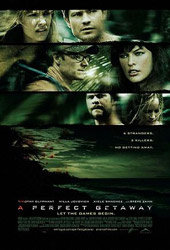 ♠ Speaking of honeymoons, apparently there's a new thriller movie out called A Perfect Getaway (starring Nikki the Disposable from the third season of LOST), in which two newlyweds travel to Kauai for their honeymoon and then get stalked through the jungle by homicidal maniacs. I think we should screen that at our reception so it's fresh in our minds when we drop the cats off at Kathy's house and head for Kauai ourselves on October 5.

♠ Kathy and Chris pick their own cats up from our house on Monday -- the gay kitty brothers have had a quiet, normal stay. Titan runs around getting high, and Lake throws up in indiscrete locales (although the first time, he actually went into the litter box to do it -- he would do well at a frat party).

♠ Other plans for the weekend include a little sushi tonight, a little poker tomorrow, and some wedding crap on Sunday, interspersed with some house-cleaning, and buying large amounts of unnecessarily-valued-value-paks at Costco.