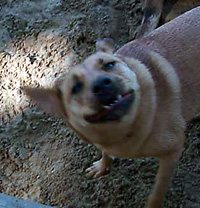 ♦ Back in the days when Chompy wasn't an agoraphobic recluse like Sigourney Weaver in Copycat, we used to take her to various locales that passed as parks around Tallahassee, where she'd do her best to escape. Once, she broke free and did a 100 yard dash towards the nearest highway. Since smokey Mike had the lung capacity of a third clarinetist in marching band, I had to pursue, and tackled her mere feet from the road.

♦ In fourth grade TAG class, there was a chubby black kid with thick glasses who we could always get a rise out of by telling him a bee was chasing him. He would flail madly about with a squealing voice like a saxophone mouthpiece. Once, he gave an oral book report on Dear Mr. Henshaw, and the class couldn't stop giggling about the way he sounded when reading the title.

♦ When my parents and my sister were driving to All-District band in 1994, they hit an animal that ran away before they could see how it was. The next month, someone was talking to a girl who lived on that street and asking about her new black puppy. She replied that it had been hit by a car a month before and died. I still don't know if it was the same incident. 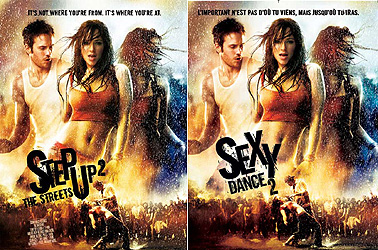 ♦ When we were in Paris last year, the subway stations were plastered with advertisements for the latest American movie that should have had a "straight-to-trash" release, Step Up 2 The Streets. The French savvily distilled this nonsensical title into the most important aspect (chicks dancing) and retitled it Sexy Dance 2.

♦ As a child on road trips, I had an unhealthy fascination with the road atlas. Before I reached the age where I could actually mimic our route, I invented my own route by tracing any given road across the page. When I hit the end, I simply turned the page and kept going. At some level, I probably grew up thinking that Arizona was adjacent to Arkansas.

♦ In 1997, I got tired of my composition professor asking me to introduce more wrong notes into my music, so I creatively honked out a violin sonata as ridiculously wrong as I could make it -- it was not a subtle satire. To my surprise, he loved it. I then showed it to one of my high school music teachers who loved it even more, and asked me to rewrite it for her oboist son. I hope it was never actually performed.

Man gets 20 weeks in jail for whistling

Burglar caught with his pants down