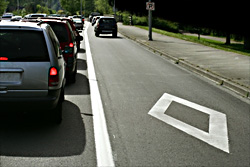 HOV cheaters have a special, and dark, place in the hearts of area commuters. As motorists sit in stop-and-go traffic or pick up strangers to meet the minimum number of riders to use the free-flowing HOV lanes, cheaters blithely fly by in the restricted lanes. Alone.

"Sometimes when you commute, you do some crazy, crazy things when you see all those red lights in front of you," said Aleta Joy Williams, a daily cheater who has racked up 10 HOV violations [...] "You need to be at a certain place at a certain time, and you are willing to do whatever it takes to get to where you need to."

When asked if she had tried waking up earlier, Aleta Joy Williams demurred. "Changing my own habits instead of breaking the rules would be so un-American. Why would we set our clocks back an hour every year if we weren't supposed to sleep until it's light outside?"

Karen Marie Livingston, [...] got six tickets during years of cheating, the last one a whopper. "I decided to stop when I had to tell my husband I got a $1,000 ticket," she said. "I cried for a week. But I couldn't blame anyone but myself. When you get a $1,000 ticket, it's a come-to-Jesus moment."

Jesus could not be reached for comment about his stance on HOV lanes.

Tragically, the Washington Post has devoted more ink to pitiful stories from self-entitled weenies, rather than address the more ominous conspiracy that the most blatant of the female HOV violators all have three names (and therefore, may be presidential assassins).

During her cheating days, [Karen Marie Livingston] would sometimes take hooded coats and arrange them on the seats so it looked as if there were three people in the car. Sometimes that worked. She also talked her way out of four tickets. "I played one as a dumb female. Another time, I said I was pregnant and sick. The officer understood because his wife was pregnant." 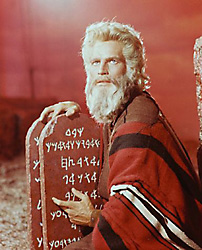 Jesus was unavailable for comment about dumb females, although his position on liars is set in stone.

Cheaters hurt the system by clogging the lanes and making those who make the extra effort to play by the rules feel like suckers. Thousands of drivers a day pick up slugs, commuters who accept free rides from drivers looking to add passengers to qualify for the HOV lanes.

Of course, being labelled as a "slug sucker" isn't the only way to legally ride in the HOV lanes -- you could drive alone in a Prius (because one clean commuter is equivalent to two dirty commuters in state legislative mathematics), or simply bring along your two kids and leave them in the car with a Little Mermaid DVD all day long (not recommended for parents whose children are susceptible to extreme changes in temperature).

Ricci Angresano, with six convictions, said the enforcement and penalties made him change his ways. [...] Asked why he didn't take Metro, he said that he tried it but that it was difficult to get a seat on the commute home. And then there were all the germs. "Everybody's stacked up like sardines, coughing and sneezing and touching the poles," he said. "Then they turn up the heat in winter, and the germs just multiply." 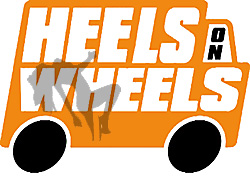 Angresano provided the same reasons when asked why he no longer frequented his favourite strip joint, which is why a consortium of private companies is funding an effort to combine carpooling and lapdancing. In a trial run of "Heels on Wheels", drivers paid extra to pick up strippers in the slug lines and arrived at work on time and in a good mood.

Jonathan Krasnov [...] cheated every morning on I-95/395 for 11 years, or about 2,200 trips. He received six tickets in that time. [...] He stopped only because he received a $500 ticket after the fines went up. "You get to the point where you are so desperate you can't take it anymore," Krasnov said.

Krasnov's admission generated interest in a new money-making scheme for cash-strapped local governments -- starting next Monday, repeat HOV offenders will be tailed from their homes all the way into the lanes by an unmarked cruiser, guaranteeing a conviction. After their cars are sold at police auction, they'll face a $2000 ticket and get dumped naked into the HOV lanes: at the mercy of the very slug suckers they cheated, in what can only be described as an "eye for an eye" scenario.

This is why you're fat

Maybe not a father at 13

What's the best excuse to cheat with in the HOV lanes?