Review Day: Indiana Jones and the Kingdom of the Crystal Skull

there is nothing worth spoiling in this movie

This movie did not need to be made. 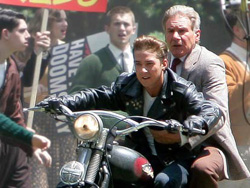 I never had a compelling urge to watch it, but after borrowing it for free from my parents and leaving it on my shelf, unwatched, for two months, I finally put it on in the background while I worked on my Wiki.

I'm still not exactly sure what the plot of this movie was, because it jumps from inexplicable situation to inexplicable situation like a Choose Your Own Adventure book without page numbers. What I walked away with was that Indy stumbles across a crystal skull while searching for an old colleague, but only because said colleague had left it there (akin to finding the Holy Grail on the Slim Jim shelf in 7-11). They reunite and decide that the skull needs to be returned to the hidden civilization where it REALLY came from (because otherwise the movie would just be Indiana Jones and the Crystal Skull, which is entirely too succinct).

After a thirty minute car chase, during which cars occasionally vanish entirely until it's opportune for them to reappear, and Shia LaBeouf (almost French for SHIA THE BEEF) swings through the jungle on vines with a pack of monkeys, Indy and his gang arrive at a suitably old temple where they solve ancient logic puzzles to unlock doors (if this movie were a text adventure, their actions could be summarized with > PUT SKULL IN SKULL-SHAPED SLOT). In the end, the world is threatened by CGI and villains die when they get too greedy. 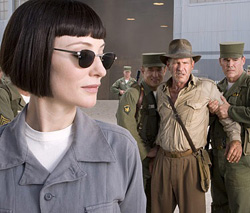 The tone of the movie is never certain -- apparently they couldn't decide whether to make an Indiana Jones movie or a "Scary Movie" rendition of a parody. This is immediately noticed in the casting of the Scrubs Janitor as an FBI agent who thinks that Indy might be a commie. Are you supposed to take him seriously? He acts like a janitor pretending to be an FBI agent, which is what he would do on any given episode of Scrubs. Immediately after that, Charles Widmore shows up as Indy's superior, ostensibly to enlist his help in finding the island from LOST. 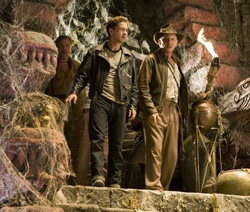 Musically, the soundtrack is exactly what you'd expect from John Williams. Two years ago, I posted a review of the music from Raiders of the Lost Ark, and this soundtrack is just as bad. Williams still can't resist orchestrating every inconsequential action on the screen, and the end result is so busy and cacophonous that you almost start yearning for a Philip Glass score.

The cinematography of this movie was definitely a six-syllable word. Beyond that, there's nothing to recommend it. The story lacks any forward momentum, so the film is filled with really long reaction shots of Indy smirking, as if the audience is supposed to chuckle. I almost expected a canned laugh track to fill the shots.

It seems like most of the budget for this movie was spent and wasted on special effects, beginning with a Greek chorus of animated prairie dogs who watch the action in the first scenes (I'm guessing George Lucas was the driving force behind that addition). The problem with the effects is that the whole world still seems fake -- it looks as if the cast filmed the entire story in front of a green screen. The South American temples don't feel ancient, they just look like rejected graphics from Diablo II, and a colourful, cartoony haze covers every frame like the aftermath of a Bugs Bunny pot party. No doubt they wanted to emphasize the richness of Technicolor so people would go out and buy VCRs.

Bunnies the target of gun-toting cow

What was the best Indy movie?