Going into college, I had 14 AP credits in English and Physics, and the feeling of getting exempt from additional classes to sit in my dorm room reading the entire back archives of Sluggy was intoxicating. Since I had embarked upon a course that would ultimately net 190 credits (I think 96 were needed to be a qualified liberal arts major), I decided to see just how many more transferred credits I could get without leaving the home base buildings of McBryde and Squires.

There were an inordinate number of rules surrounding transfer credit, mainly to prevent people from substituting Androgynous Yoga 1001 for Biochemical Reactions 4625, but the most important to me was this one:

This rule effectively gave me free reign to take a transfer course, slack off as low as a C-, and still have it appear on my transcript as ungraded credit (one of the major life lessons you learn in college is how to work the system). My next step was to determine which courses I wanted to take (all the annoying "you must be well-rounded" core classes) and where I wanted to take them. Of course, I turned to the esteemed NORTHERN VIRGINIA COMMUNITY COLLEGE: ALEXANDRIA CAMPUS. Community colleges often get a bad reputation, but at least NOVA's computers aren't identified like this on the Internet: 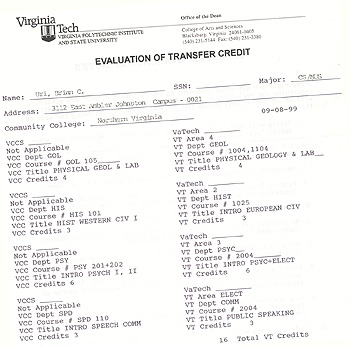 I ultimately took 16 credits of summer classes at NOVA -- the stomach-wound kind that drag on for twenty-five hours in the day until you must make the choice between death and skipping classes (In general, I skipped).

The History of Western Civilization I: The bubonic plague was a welcome interlude for the inhabitants of this time period, if it was as boring as taught. The instructor had just come back from his vacation and spent several class periods showing slides... of South America. I stopped showing up halfway through the course, and when I arrived at the final exam, the instructor gave me a talking to and an evil look, expecting me to fail because I had missed his presentation on some Mayan temple he visited with his wife. After I won the class with an A on the exam, he looked flustered and sputtered, "Attendance is critical. You are seriously influencing how I'm going to teach this class in the future!" I hope so.

Psychology I and II: I remember nothing about this class, as it was a lecture. I do have fifty pages of definitions saved in my files, so I'm guessing it was either a memorization class or they brainwashed us all into sleeper agents.

Public Speaking: I gave a dramatic reading of Are You My Mother? to an enthralled class of five at 8 AM. This class was my closest call, since attendance was actually counted as a grade, but the professor who insisted that an audience was an integral part of communicating had obviously never had an imaginary friend before. I squeaked by with exactly a C- and ended my community college career forever.

Barack Obama is tired of your poop