When I looked through my old journals for thoughts on the music theory class I took in my senior year, I noticed that I generally wrote one of four single sentences throughout the year: theory was boring, theory was dull, we had a sub in theory and did nothing, or theory was a video. The reason it was so boring was likely the wide range of personalities in the class -- like all public school classes without the TOR (Talented or Rich) label, more time was spent on the remedial cases than the kids who actually cared.

Music Theory at the high school level is an introduction into the grammar of music -- if music was English, Music Fundamentals would teach the letters and words, Theory would teach how to make a complete sentence, and your Composition Instructor would teach you that complete sentences are stupid and you should write like James Joyce to truly be artistic. The problem with having a Theory class with no prerequisites in high school is that you'll end up with students that can't even read music.

Our merry Theory class had six students. On one side of the room sat Boris, who was a goth/emo hybrid before either was fashionable and never turned in a homework assignment, Dustin, who wanted to learn how to write punk music, and Kelley, who had to be taught what a half note was (Dudes with a name like Kelley often have questionable musical acumen).

On the other side of the room sat Melanie, who was a reasonably low-numbered violinist (although I think anything under 30th Violinist counts as "top of the class"), Ann, who went to Governor's School for voice, and BU, who had just returned from Governor's School and decided that he was the greatest composer since Victor Lopez.

Like all composers, I mostly ignored the rules of functional harmony, choosing instead to write whatever I liked and then try to shoehorn it into the proper classifications by making up ridiculous chord inversions and using the VII chord as often as possible. And because the teacher was too overwhelmed with kicking Boris out for listening to his Walkman in class, she never had time to correct my work. Below is one of several assignments I saved from that class thirteen years ago, in hopes that it would one day be worth millions on eBay. 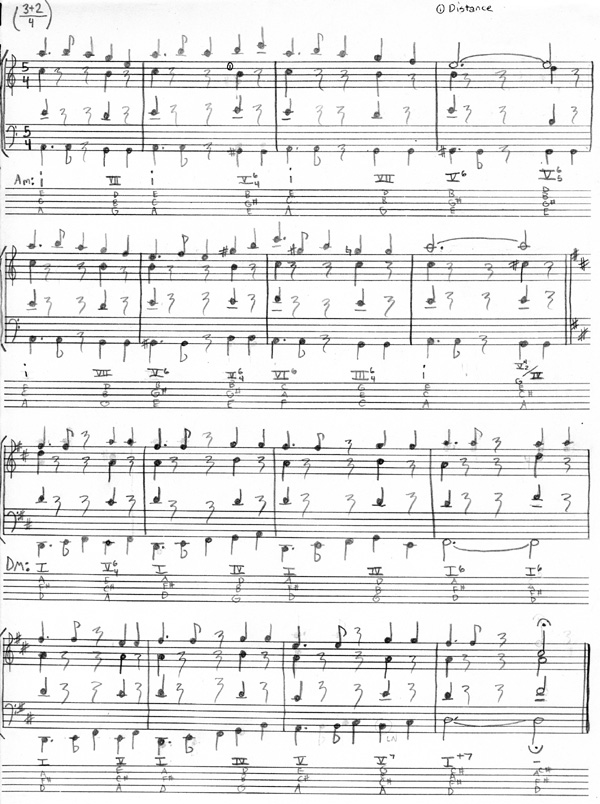 The assignment was probably to write a four-voice work that goes from a minor to a major key, so of course, I had to be difficult by writing it with five beats in each measure

(200KB MP3). By the time the third quarter rolled around, I had given up on learning anything useful, and was a blank slate when I started Dr. Bachelder's Theory Class at college the next year.