♠ This week's LOST was good, although the whole "flash" concept is already getting old to me (flashes just aren't the same without nudity). I also called the source of the glowing light immediately, as evidenced by the IM I sent to Mike (of Mike and Chompy) IN REAL TIME.

♠ I feel like they're throwing a few too many new concepts and characters into the mix for a "second to last" season -- if this were a book or a symphony, the unfolding would occur in the first four seasons, with the fifth being a tightly winding spiral to the final season full of explosions and revelations.

♠ This is also how I plan to structure my life -- by thirty, the exposition will be complete and all the principal characters will be known and loved by the audience. I will get into suspenseful, ridiculous situations until the age of 60, and then spend the next decade unleashing family secrets, like the truth about my paternity and the reason I can get so much done in a single day (time travel may be involved). By 75, all of my conflicts will be resolved. Jack Bauer will sit in an SUV and cry for twenty minutes, and then I'll go out with a bang by mishandling a roll of unstable dynamite. 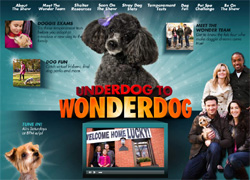 ♠ This weekend's plans originally involved a Benefit Cocktail Party to Help the Hungry (because the more you drink, the less room you have for food), but that was cancelled after an unfortunate vector of contagion. Instead, I'll probably do some work-work and look forward to the 12th, which has the tertiary distinction of being 12 of 12, Steak Night, and the 5th Year Anniversary of buying a house. On Sunday, we're all headed to Mike's house for a marathon of an Animal Planet show he's a part owner of, Blunderdog to THUNDERDOG, where clumsy dogs are dressed up like Thor and sent out to wreak havoc on their tormentors. 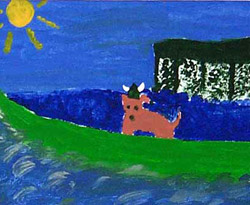 ♠ This is what Chompy would look like if she went on that show. The only problem is that she's scared of thunder, so she'd have to hang back from the initial round of pillaging and just collect the spoils of war. At least then, she'd be able to avoid any chance of injury -- Chompy: Plunder Dog sounds much safer than Chompy: Sundered Dog.

♠ I think more nicknames should have colons in them. It's time we pick them up, dust them off, and put them back to work making people sound more impressive. I guess this also means that I support colon cleansing.