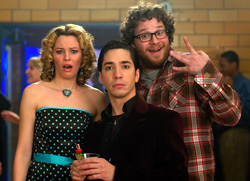 On Saturday, after a quick run to Costco to stock up on a lifetime supply of corned beef and things made of wicker, I spent the day working until I was interrupted by a phone call from Jack who had a Kristy-free house and lots of leftover Super Bowl snacks to get rid of. We held an impromptu poker game that evening, in which Jack came in first, followed by Kathy and then Chris. I managed to get 5th out of 7, which was fractionally better than Jaood. 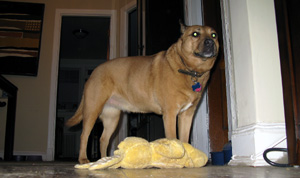 Sunday afternoon was the fabled Underdog to Wonderdog marathon, which steals ideas from every makeover show on television and applies it to down-on-their-luck dogs like Lucky, who was aptly named after being hit by a car. A team of four rehabilitates the dog and finds a new home, with the groomer and trainer doing the actual work while the "team leader" shows off his guns and the "canine carpenter" builds ridiculous garbage in the back yards of the new dog owners while flirting with the "team leader".

You could have collected lizard poop for your Ph.D