pissing around before a fortnight one off

♠ A major installation we were supposed to be doing at work got delayed by paperwork, so instead of spending Friday in a deep, dank lab typing rm -rf /, I decided to take the remainder of the week off to supersize my two and a half week vacation. It worked for NBC primetime in 2001, it can work for me.

♠ It's almost sad to realize that after deducting all this leave from my leave pool, there's still over 80 hours of leave remaining. I could take another two weeks off to do something meaningful, like leveling one of every Warcraft class to 70, but that wouldn't be nice to the people at work. I guess I'll just save it up for a trip to Petropavlovsk in December because I hear the weather there is quite nice in the winter. I could mosey up to the local McDonald's and get a nice, warm McRussian to go with my Soviet Shake (it's been renamed but the cups are pre-1991).

♠ Speaking of McDonald's, they apparently own a market share of Google. Doing a search on Reston restaurants last week brought up a very interesting search results page. Every restaurant in the area must have become a McDonald's overnight. I'll definitely go to the one with 2 reviews though.

♠ This weekend, we'll be dropping Booty and Amber off at my parents' house and heading down to Colonial Beach to celebrate the first birthday of Ella and her cousin Thomas. Ella is developing typically for a baby -- she can now recite the divisors of non-prime numbers up to 63 and can bisect a triangle using only a ruler and a stick of gum. After the party, I plan on finishing up my Europe packing and then playing lots of Warcraft to make up for the boring two weeks to follow, where I'll have to run around some foreign cities without a Night Elf or an Auction House in sight. 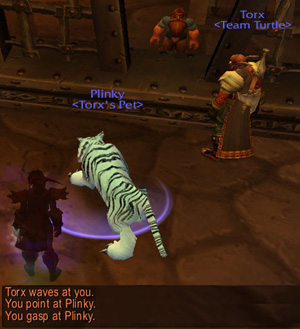 ♠ One of the hunters in my guild has a pet named after me. There's also rumours that the Horde are making a guild called <I Hate Plinky>. I highly approve of this and plan to join it as soon as possible on Evil-Plinky, the Horde priest I'm leveling to fight against Good-Plinky's teammates whenever the games get too easy.

♠ Though I won't promise anything, feel free to check back here throughout the month of April for my updates from the road. The next update you can count on will be on April 21.