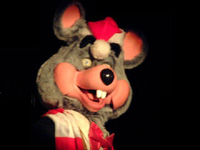 ♠ I still don't understand the draw of Amy Winehouse. Her song, Monkey Man comes on XM all the time now, and it sounds like she's barely sober enough to phonetically sound out all the lyrics

. Maybe people just like the real-life drama aspect of her persona, since she's on so many drugs that she could easily pass for a cocaine-addled animatronic puppet.

♠ We went to Chuck E. Cheese for dinner on Wednesday night for giggles' sake, and had some surprisingly tasty pizza while watching various stuffed animals sing the alphabet song. Because of corporate downsizing, Chuck himself was the only animatronic puppet present -- the rest of the gang (like the dog and the cat) were relegated to backup band status on the video monitors. 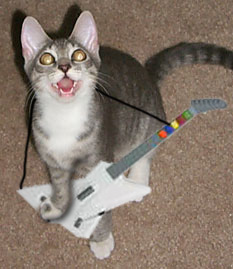 ♠ Booty is going to be starting a band any day now, and has decided that the band's name will be Booty and the Hellofish. Amber doesn't really want to change her name to Hellofish, but she has no marketable musical talent. Meanwhile, Booty can play a mean guitar with three chords: ii, VII, and V+.

♠ Chomped Mike left Guitar Hero at my house when he came to visit on St. Patrick's Day, but I still haven't had a chance to give it a shot. Maybe I'll have some time this weekend to sit down with it -- between work and Europe, time is scarce!

♠ We've now plotted out most of our Europe trip through southern France, mostly thanks to the planning skills of Rebecca. This weekend, we'll probably look at hotels in Collioure and Barcelona. Thanks to Chomped Mike, I will also be able to do occasional updates to this page from Europe, so you'll be spared a "best of the URI! Zone" sabbatical (in the wretched style of Jim Davis) or even worse, no updates at all!

♠ Chomped Mike is not an official moniker yet... I'm trying out several possibilities and will choose the best one based on audience feedback and poetic flow.

♠ This weekend is also Easter, which means I will be penitent and thankful for the fact that I no longer have to play trumpet in some last-minute service like I did all through college. Sure, the extra money was nice, but I can earn a lot more per hour by posting my music on Myspace and being a hooker.

Red light cameras too good for their own good?

Chile's disaffected 'Pokemones' don't care much about politics. They're too busy having sex.

It's illegal to sell states on eBay