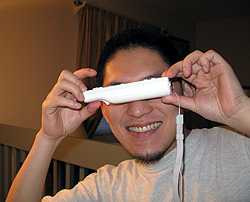 The Wii has risen above the naysayers who predicted that no one would enjoy its unique control scheme, and kooky games on other systems like the karaoke Singstar, Rock Band, and Guitar Hero have continued to show that the population's thirst for innovative games has not been quenched. However, not every game is an automatic success! Here are three Wii games that never made it out of Quality Assurance.

Photograwii:
Players move around a simulated world as a photojournalist, with quests like "Take a picture of Farmer Brown's Prize Swine". By holding the Wiimote like an Instamatic and saying "chk chk" into the microphone, players take fun and artistic shots and then upload them to be judged against the shots of other players across the world. The loading screen warns, "Make sure there is nothing you might trip over before you cover up your eyes with the Wiimote. Do not use near stairs.". 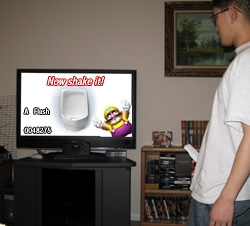 PeeWii:
Hold your Wiimote at waist level and try to fill up an onscreen urinal without any spillage. Tutorial mode shows how you can adjust the angle of the Wiimote to acheive greater distance on the later levels, where the urinal moves farther away, or oscillates from left to right. Make sure to jiggle your Wiimote to get out the last few drops when you're all done! 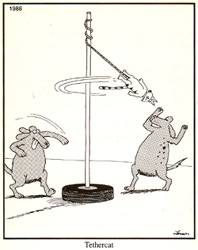 Wii Tethercat:
Based on the 1988 Far Side comic, this game was originally going to be one of the sampler games shipped in Wii Sports. Two players face each other holding their Wiimotes and execute a slapping motion any time the animated cat swings around the onscreen pole. The game would also have shipped with dog masks, because it's not cruel when cats are tortured by dogs, just hilarious for the entire family. The loading screen reminds players to "securely adjust the Wiimote wrist strap to prevent accidents and to make sure that the eye holes on the dog masks are lined up with your pupils".

Terrorists contemplate the use of "dirty cats"