RETURNED: On February 15, 2008, Paige, her husband, her dog, and her spawning future baby left Spain to return to the sunny lands of Houston, Texas. 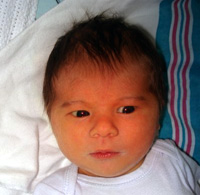 BORN: Nadia Sophie to longtime URI! Zone reader, Brianne, on February 28, 2008. Nadia weighed fifty-seven pounds and thirteen ounces or possibly some other random set of numbers, and will grow up to be a distinguished trumpet player. In celebration, at least one Museday Tuesday this year will be written "for Jay-Z and violas" or a similar instrumentation. 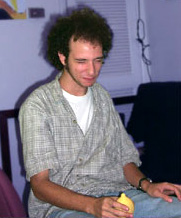 MOVED: On March 2, 2008, Mike (of Mike and Chompy) finally moved away from Tallahassee, that serenely sluggish cesspool of Southern sloth where the city scenery is selectively speckled wtih slutty sorority sisters and homeless shelters. Recognizing the D.C. area as a place with a strong job market and comprehensive subway system, he rented a house in Georgetown as far from the Metro as you can be without travelling three miles straight up into the atmosphere. As more and more Florida State music alumni illegally immigrate here, plans are underway to create a new School of Music that hires only through nepotism and intrigue, with a well-respected name like the Kathys Biddick School of Music, or maybe the Mikes Catania Composition Academy.

MOVING: Starting on March 2, 2008, BU has committed to a daily regimen of stretches and biking so he's not an out-of-shape blob on his Europe trip. Sedentary sounds a lot like sediment, and BU ain't no barnacle. To ensure an accurate schedule of exercise, he is rewatching Alias from the beginning.

MARRYING: On March 4, 2008, Larry, inaugural member of the "Month of Thanksgivings" phenomenon and Poker Champion of 2007, will be marrying fiancée, Janice. This is also their fourth anniversary of dating, which will make it much easier to remember fifty years from now (and the reason why all of my life events, including births, deaths, and purchases of large kitchen appliances will only occur on 12 of 12 day from now on). Sadly, Larry will be moving to Maryland after the wedding which means he'll have to become a crappy driver and bemoan the extinction of the Maryland crab while waiting for the late night drag races to start.

What have you been up to recently?

Italian men can no longer grope