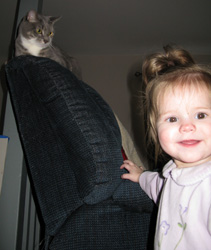 ♠ Ella came over for a playdate yesterday so she could show off her many talents, like dribbling spaghetti down her chin, sticking her fingers in sockets, and chasing cats. She has also learned how to greet Booty:

(2MB WMV). She's not a LOST fan though -- by that point in the evening she was a victim of narcolepsy and intrigue.

♠ I thought LOST was clever last night. We picked up on the fact that the Sun/Jin story in the future was not what it seemed, since the actors' scenes seemed so LOSTianly delineated, but we didn't see the final time shift coming. I also noticed that the date on the tombstone was the date of the plane crash, and we suspect that the person is still alive. Finally, the "man on the boat" twist was weak -- I picked that up long ago. If he says anything about his son this season, Rose should punch him in the face.

♠ It's been a pretty low-key week although our Europe planning is back into high-gear. We're currently looking at cheap hotels based on the recommendations of Paige and Rick Steves, since the former will find us good deals and the latter will find us hotels near the ice cream parlors. Only two weeks until Europe! 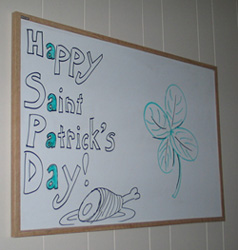 ♠ This week was also badge renewal week at work -- the period of time where all the eight million forms of government identification from the previous year suddenly expire and you fill out reams of duplicate forms in triplicate to renew it all for another year. Of course, other obstacles like to sneak into the process, like the card-printing machines that miraculously break down for three days at a time and the shady Irish revolutionary who offers you three point two million dollars for the secret ingredients in Lucky Charms.

♠ Happy Birthday Netty! Have a great weekend, everyone!

Mary is not in the sun