Fifteen Years Ago Today... I was a tiny bespectacled freshman at Francis C. Hammond Junior High. Tonight was the City Fine Arts Concert, so my Wednesday afternoon lesson with Jack Dahlinger (a retired high school band director who loved to play duets all lesson long) happened at 4:30 instead of 7:30. Lessons on concert and recital days were always great because you could use the concert as an excuse to not do anything strenuous -- "I have a two-measure solo tonight in Londonderry Air and I don't want to risk a lip-blowout so lets play some more duets instead of that etude".

) and played two or three ridiculously easy songs with the Junior High band. One of the songs was definitely Let's Go Band, and had the gym been any bigger, it would have been like a low-budget Peach Bowl halftime show.

Ten Years Ago Today... I was in the second semester of my sophomore year at Virginia Tech (living with Beavis). Because Virginia Tech has historically been incapable of putting Spring Break IN THE SPRING, the first or second week in March was always vacation time. In 1998, I was back home in Alexandria increasing my street cred by hanging out at the high school. March 10th was the first icebreaker meeting for kids who wanted to audition for High School Drum Major

. I volunteered to teach a new set of clowns every year for four years and during the first meeting, I always had to weed out the ones that couldn't walk backwards without falling over or shatter the dreams of the ones who thought that being Drum Major would get them lots of women (it does not). 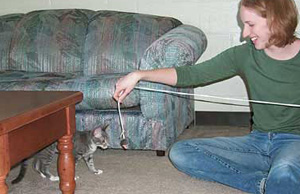 Five Years Ago Today... I was in my final year as a graduate student in Music Composition at Florida State. My thesis had been defended on 03/03/03 at 3:30 PM, which is almost as cool as anything related to 222, so I essentially had two full months of classes left with no real responsibilities. (I had to teach, of course, but mostly we watched music theory movies like Leading Tone of Doom or Hawaii Five-One or played games where we tried to guess which music students did NOT smoke pot). With so much free time, I decided to buy a kitten. On March 10th, 2003, Kathy came over to see the cat and decided that she should be named BOOTY, because she had booties on her paws and because she shook her booty when playing with her shoelace. (This exact same shoelace is currently on the floor of my living room). 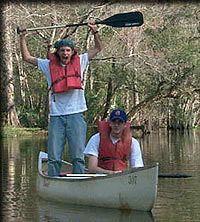 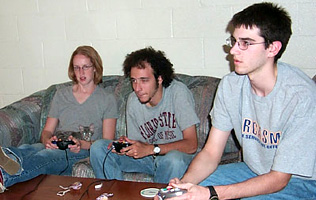 After that, we went to one of the various bodies of water with Wakulla in the name for a canoe outing with Chompy (the human) and his brother, Steve. The evening was ended with Chinese food and multiple games of Super Smash Brothers Melee. Kathy, who was already bored with the "video games" phase (which followed the "paint stuff" phase and the "Scrabble" phase as attempts to ease the Tallahassee Boredom) soon quit to play with Booty some more.

Today... I am a software engineer living in Sterling with a mortgage, two cats, and a penchant for losing at poker. I took the day off to celebrate Commonwealth Day (UK) and Labour Day (Victoria), figuring that it would help my Europe immersion. And, Rebecca is home!

A man's six-pack is his castle

The face of DHS looks a little pale