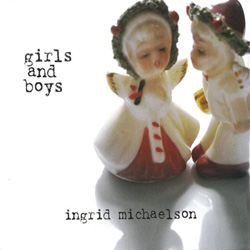 Girls and Boys is a CD by Ingrid Michaelson, whose music has appeared on XM Radio, Grey's Anatomy, and Old Navy commercials. It's a mix of styles from KT Tunstall to Jem to a non-annoying version of Vanessa Carlton, and was one of several mini-presents Rebecca left me when she went to Guatemala last month. I ended up liking the CD so much that I downloaded the whole thing online to support the artist through Amazon's sleek MP3 store.

Music on the CD runs a gamut of emotions and is always pleasant to listen to even if you (like me) don't really listen to the lyrics. I had this CD looping in my car for about a week before loaning it to Anna, and only ever got tired of one song, December Baby, because it was too long, monotonous, and vampy, reminding me of Gemma Hayes' first CD which I disliked. Here are my thoughts on a few of the tracks, with audio samples:

The opening track reminds me a great deal of KT Tunstall -- if you gave her a younger, more innocent timbre, you might come up with a song like this. This is also the heaviest track on the album, and everything else is more acoustic and/or indy than this one. I like the purity of Michaelson's tone, and the way it gets stronger without getting harsher. 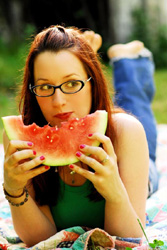 This is one of my favourite songs on the album because of its unpredictable melodic patterns which make the lyrics almost stream-of-consciousness. It's easy enough to write a poem that rhymes, but it takes skill to lay out the words in a way that both highlights and blurs the rhythmic beat at the same time.

Another favourite -- this one just exudes a pleasant nature from every note, much like the third movement of Sibelius' fifth symphony.

Corner of Your Heart

This is the obligatory moody, melancholy track, and it works very well -- it reminds me a lot of the instrumental track on the Cardigans' Gran Turismo CD which was the best set of music depression I've heard. I can totally picture some retarded Grey's Anatomy montage playing in slow motion over this song.

You can hear more samples at the Amazon store:

Burglars done in by doughnuts