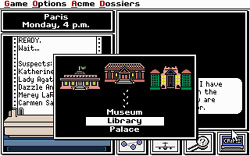 Educational games in the 80s were a hit-or-miss affair. For every awesome game like Ancient Empires or Oregon Trail, there was a steamer like Logic Master or Gertrude's Boot. One game series that never got old, though, was Carmen Sandiego. 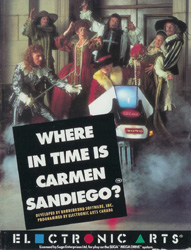 The games definitely got easier as the years went by, either because the players got older or the reference books became simpler to master. In World, you might get an obtuse clue like "The thief was going to a neighbouring province of Tibet with more than one million citizens" which really worked the deductive reasoning skills (and using Alamanacs at the age of 6 is tricky unless you grew up in a house where the yearly more-disappointing-than-clothes Christmas gift WAS an almanac).

In Europe, the reference book was a Fodor's Travel Europe book so ill-suited to the task that the game turned us into expert guessers who never even bothered to look anything up. (The real-life application of this is that if I need something on my Europe trip, I'll check the Bank first. If nothing is there, or an animated bomb explodes, I'll proceed to the Hotel and then the Market).

By the time America's Past rolled around, no deductive reasoning was required at all, which made the games very easy to win. Instead of determining the gross national product of Burkina Faso, a clue might be "He said he was going to visit the Battle of Gettysburg". You could just look up the battle, set your time machine to Gettysburg 1863, and WIN.

Reducing beer in the name of science

Marriage on hold unlike helium leaks out