When Mom or Dad Asks To Be a Facebook 'Friend' 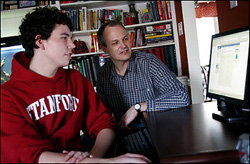 More and more moms and dads are signing onto Facebook to keep up with their offspring. Not only are they friending (or attempting to friend) their sons and daughters, they're friending their sons' and daughters' friends.

Apparently "friending" is a legitimate dictionary gerund now, and for Facebook neophytes who are unaware of its meaning, this paragraph might be seen in a more menacing light, suggesting that the parents of America are a bunch of perverts.

Some, like Matt, take the requests in stride. He ultimately friended his dad. Others are less sanguine, voicing their dismay via online groups that decry parental intrusion and offer tips on how to screen out mom and dad. ("Just go onto their computers and delete their accounts." "Just don't add them as a friend or any1 that is a co-worker with ur parents duh.")

Based on the popularity and success of these tips, a cottage industry has sprung up catering to students who wish to keep parents out of their lives. One Facebook group suggests that you can keep your parents off the Internet by installing viruses on their computers. Another suggests that to keep your parents from visiting on College Parents' Weekend, you should "just go in their car and delete their spark plugs LOL".

"I do not know if this has happened to anybody, but this morning I log on to Facebook and I have a new friend request!" wrote 19-year-old Mike Yeamans, a sophomore at James Madison University, on one of several "No Parents on Facebook" groups that have popped up on the site. "I am excited to make a new friend so I click on the link. I could not believe what I saw. My father! This is an outrage!"

Actually, I can see where this guy is coming from. I too would be ashamed to friend my parents if my profile picture depicted me as some kind of Roman pimp like the actual profile picture shown here. Not only is it historically inaccurate, since these shades of cloth were probably not creatable before 476 AD, but no real Roman pimp would choose to dress up like another pimp. The Roman whoring business model would never thrive if Superfly Flavinius dressed exactly the same as Sexontop Sextilius, because potential customers would have no way to judge which one was better.

Lily Goldberg, 17, a junior at Gaithersburg High School in Montgomery County, said having parents on Facebook just seems weird. "It's like having them walk into my room," she said.

Honestly, I'm amazed that a high school student could have enough dirty secrets at that age, but at the same time, be ignorant enough to put these secrets on their Facebook page. Unless you're a member of the "I keep my weed in the top drawer next to my underwear" group or the "Firsthand accounts of teen pregnancy" group, there's probably nothing on your pages that your parents actually care about. And if you're stupid enough to post your underage drinking pictures in an album called "ME WASTED LOL" then you're pretty much in need of parental intervention anyhow.

Today, the fastest-growing segment of Facebook's estimated 66 million users are people 25 and older. More than half of the site's users are out of college. Whether that will have an impact on Facebook's coolness quotient remains to be seen.

I remember when it was a big deal on Facebook that you were born before 1980. Now, at least ten of my coworkers are on the site, with more joining every day. Instead of trying to corral users by age, Facebook could be greatly improved by simply adding a two-question quiz to the registration form:

Answering affirmatively to either question would automatically redirect the new user to www.myspace.com.

Vatican updates the seven deadly sins to include dog poo