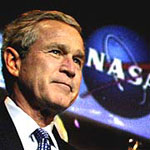 As most people probably know by now, Bush is interested in establishing a moon colony to facilitate the exploration of deep space

. Over the next five years, he'd like to redirect $12 billion dollars towards ensuring that the next round of moon landing photos are less fake than the previous ones

. Insider sources suggest that half of that amount is earmarked for licensing stock planetary footage from recent space documentaries, such as Independence Day and Third Rock from the Sun.

, and that the proposed budget for next year looks like there will again be huge deficits when Bush merges arts education and prisons into a single program (under the tagline "Compulsory Practica Musica")

, this really doesn't seem like a cost-effective move right now. Although I'm sure we'll get wonderful innovations in daily life as a result (such as pens that write upside down, Hungry Man dinners, and Men in Black III), this program is just a mismanagement of catastrophic proportions waiting to happen. How does one justify the spending of so much money on a program which is experimental at best when other programs are hurting for money within the borders of our own country?

If I were an outgoing President, I'd rather be known as a President who started and ended a war, rather than a President who started a war and fled to Mars. Actually, if I were President, we wouldn't have gone to war. As an aside, it's interesting that the War on Iraq is now a War on Terrorism, despite continued affirmations that Iraq and al Qaeda were not linked. No doubt, this is one more of Bush's mispronunciations of the word "Iraq" -- his Texan twang doubled the number of syllables.

I suppose though, that if Cheney's company is allowed to steal $27 million dollars for Hungry Man dinners with the excuse, "It's difficult to determine how many people will be at the dinner table in the middle of a war zone and the number must be based on estimates."

, I shouldn't begrudge NASA its piece of the pie.

Q: Do you think there will be life on Mars?
A: Well, maybe if I land on a Saturday night. Otherwise I am going to bring a book.

The stupidest year of Super Bowl ads in recent history