Being fat is now a matter of National Security. Military officials worry because too many recruits are now too fat to join the services (although they note that "'Large and in charge' makes soldiers look more formidable to the enemy"

. Farther down in the article is a chart of weight-loss methods, with 21% of soldiers trying laxatives (apparently forgetting that they're grown adults and not high school rowers in the Lightweight 8 at Stotesbury).

My feeling on the matter is that they should let them all in. Since I don't plan on joining voluntarily, someone's got to be out there fighting for vague, indeterminate causes. Is it really a big deal if the helicopter has to gas up more frequently or uniforms are a little snug? Evidently the military does not read my website, or they would have seen this previously posted news story touting the BENEFITS of having chunk on the front

Take a Ride on the Spacehype

When space history books are rewritten, NASA's success at blasting a crater in a comet is sure to be included as more than just a footnote.

I didn't realize that anyone was planning to rewrite any history books, but perhaps there was an executive directive to touch up the moon-landing photographs everyone suspected to be fake. In any event, when world history books are rewritten, the URI! Zone's success at forming common bonds between people of every nationality and its role in world peace are sure to be included as more than just a footnote1. 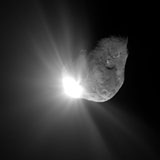 Why is it such a big deal? Well, look at what was accomplished:

Based on overwhelming evidence, I have changed my mind. This was "really a key point in our whole lives".

Note: Here is how to make your own commemorative comet photo, free of charge!

1: The rewriting depends upon my hostile takeover of Houghton-Mifflin, which is currently on schedule. This is just a footnote.