♠ Metrobus advertisements are out of control now, especially the environmentally safe buses that supposedly run cleaner than others -- they're wrapped in a technicolor outer shell with flowers and jungles like someone mated a caterpillar with a box of crayon.

♠ You know those vans with advertisements and directional arrows emblazoned across the sides that just sit on the edge of the parking lot to entice drive-by customers? A few days ago, someone had backed the Dunkin' Donuts van into its spot, which made the giant arrow point at Chik-fila instead of Dunkin' Donuts.

♠ Later that same day, I saw an arrow-van for the Cigar Connection sitting in the parking lot of Costco. Apparently Mr. Arrow-Van-Guy needed to make a bulk run. When I am old and have more money than I know what to do with, I'll make an arrow-van that says "FREE BEER THIS WAY", and just drive it around the city all day long to see how many people will follow.

♠ Q: What do customers shout when their barber is taking haircut requests? A: FREE BEARD!

♠ I cannot grow a beard, which also means I will not grow a mustache. Mustaches look pretty sleazy without a full face of hair. Everyone I've ever met with just a mustache has either been a redneck or possible sex offender. 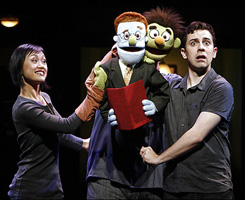 ♠ I also need to check in on the cats, Lake and Titan, on Saturday. Evidently the boarding costs at Chateauri are spiralling out of control so they aren't going to come over and harass Booty this time around. Instead, they'll stay home, throw a party, use catnip out of a hookah, and clean everything up before I stop in to check on them.

♠ Happy Birthday to Chris Moorhouse! Have a great weekend!

Delightful Smut Puppets, Brought to You By 'Avenue Q'