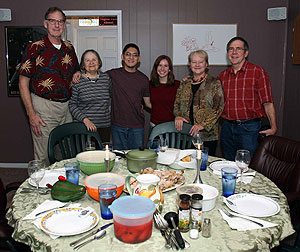 ♠ The final "Month of Thanksgiving Dinners" dinner took place last night, and immediately afterwards, my fridge was packed with two gallons of cheddar cheese soup, a pound of stuffing and gravy, a pound of mashed potatoes, five buttermilk biscuits, two pounds of leftover turkey, two bacon-wrapped scallops, three pounds of tomato-roasted lamb, two pounds of cooked ham, a small leprechaun named Hal, five cinnamon pears, a quarter of a homemade chocolate pie, two uponened packs of bacon, and fourteen Miller Lites (as you can tell, I've been working hard on those, having originally started with thirty-six).

♠ With the dinner over and the temperature having dropped twenty degrees overnight, it's now time to seal off the basement behind blast doors for the winter. Shutting down the room drops the basement temperature to around 58 in the winter, saving at least twenty bucks a month -- perfect for the installation payment option on all those prostitutes.

♠ The prostitutes aren't for me of course -- they're a Christmas present for Kelley.

♠ Once the mailman arrives today, I'll be 100% done with all of my Christmas shopping. This is helped by the fact that my sister and her husband aren't coming up this year, so we've agreed to delay our presents until next year. I can never figure out what to get them so they always get gift cards and video games. 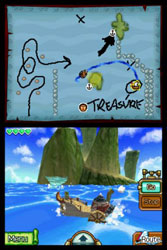 ♠ Speaking of video games, I recently beat Legend of Zelda: Phantom Hourglass on the DS. It was surprisingly good and gets a 90 - 10% split on the fun-to-annoyance Zelda scale

. I'll probably do a full review next week. In between work these days, I'm also enjoying Super Mario Galaxy on the Wii -- the first 3D Mario game that doesn't just make me want to feed my console to a hungry goat.

♠ November has been crunch month at work, which as not as cool as it sounds, since no one actual gets to gorge on Crunch bars. However, this month has been a lot easier than the crunch period LAST year when I was regularly working 60 to 80 hours a week. Plus, someone finally realized that it's good for morale if the crunch time is in November rather than the December holidays. Because of crunch time, I've been typing on the computer enough to not want to be typing anything witty when the time comes to write an update here (If I could have done a Museday every day this month, I would have, but that's a hint of weak sauce). Once December arrives, I'll have plenty more time to write more interesting updates -- December is always fun anyhow, since I can do "best of the year" posts, have contests, and make fun of the Reuters Pictures of the Year.

♠ There are no birthdays coming up in the near term which, if we extrapolate, means that no one's parents were making babies nine months ago. Since that date would have been 2/22, it's obviously that everyone's parents were too busy getting drunk to get nasty.

Man takes his beer upsets out on the goats