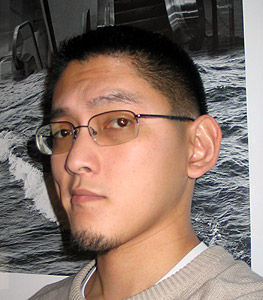 A little over six months ago I was in the local Lowe's, purchasing up some parts to construct the set for my movie, Brian Uri! and the Amazingly Blue Bathroom. When I arrived at the counter, basket in hand, the cashier immediately began speaking in Spanish, an extended unintelligible string of colloquial banter with nary a taco or cucharacha to clue me in.

I must have looked confused, but the cashier tried yet another string before pausing and asking a single word question that I COULD understand: "Espanol?"

I quickly shook my head -- a universal sign of negativity (void in Bulgaria) and the cashier looked embarassed. "Sorry, you looked like you spoke Spanish." At the time, I simply dismissed it, paid for my goods, and left the store.

This event left my mind until just yesterday, when I was at the Lowe's again to purchase shower curtain rings that don't suck. Different season, different checkout line, different cashier, same situation. The clerk immediately looked me up and down and asked "bueno?" before I had spoken a word. I actually know what bueno means now, but was not expecting Spanish, so I stuttered a bit. She apologized and said that I looked like someone who spoke Spanish.

Intrigued, I went home and downloaded pictures of famous Spanish actors to see if perhaps my visage had changed dramatically in the past ten years. I admit, I see a tiny bit of resemblance between myself and Catherine Zeta-Jones (mostly because of my awesome rack), but not really enough to be mistaken for a Latino twice in a year.

. If I get a job, maybe I should investigate the possibility that I am distantly related to Ponce de Leon who, unbeknownst to historians, must have made a trip to South Korea around 1499 and had a torrid love affair with a Korean farmer's daughter while seaching for the fountain of youth (this would have the side effect of explaining why people still continue to card me for alcohol).

Puppy rescued from watering can