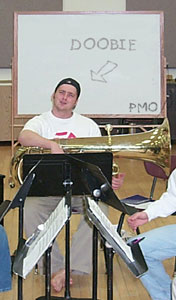 Word on the street states that Doobie got married in Tuscon a week and a half ago. The actual sequence of events involved Paige wanting to know what Jason Chrisley was up to these days, after which we visited his Facebook page and noticed a message from Shac. Since I don't have any pictures of Doobie's wife (or husband) and tubas don't come on gift registries, I'll cheaply devote today's web update to Doobie, the music/math major from Richmond, VA. 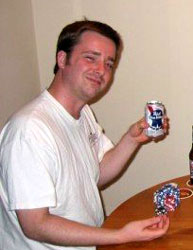 While at Virginia Tech, Doobie was a member of the Blue Ribbon Brass quintet. Blue Ribbon is a beer. He also played tuba on my fifth-year recital, but only had one solo.

Doobie was also a founding member of Delta Mu, the non-service music fraternity which was cool until they bought Greek letter shirts, and much of his wisdom has been preserved for posterity.

"If you ain't following, you ain't leading." - Doobie
"Don't think of it as circular logic, think about it as linear with crossed out answers. Linear logic is white out." - Doobie
"Val Kilmer is sweet!" - Doobie 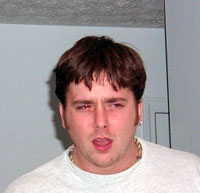 were to learn about Doobie, it might reveal some of the following, taken directly from the meeting minutes of the fraternity.

Doobie is anti-Dutch.
Crouse can kiss Doobie's ass in Miami.
Doobie dwells in uncomprehension.
Once, Doobie watched a cartoon with the Harlem Globetrotters as inanimate objects.
Doobie drinks beer with his left hand. He is mostly left-handed.
Doobie is like the lighthouse. "Come to the shore!"
Doobie dated Elayne. Next is Carly and Carly's mom. Doobie can't handle the father.
On Tuesday night, people are either sleeping or pissin' Doobie off.
Doobie does not want to be dismembered via words.
Liz wants honeymoon in Australia. Doobie wants to "go down under."
Doobie is five minutes long.
Doobie has a 72 game win streak on FreeCell.

Congratulations to the newly married pair! Stay tuned for exclusive news of a future Doobie Jr.

The dog might be appropriately characterized as now being anatomically correct