If you were at a party where celery and wing dip were served, and guest was using the same piece of celery over and over to acquire more dip, dropping the used celery on the tray, and then doing the same with bagels and cream cheese, what would you do?

Had I been at this party, there would not have been any cream cheese left. Ergo, this catastrophe would have been thwarted at the outset.

Will you share the story of the time you saw a ghost?

I told the story of the ghost I saw in 1994 as well as the ghost car I saw after making the 222 Things list a couple years ago:

. This story was immediately dismissed by Kelley, who thinks that there are no such things as ghosts, only zombies. 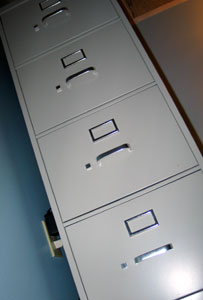 How many filing cabinets do you have? Did your Mom save some of these items and then pass it down to you?

There is a single four-story, legal-sized filing cabinet in my office which I bought at Costco for $90 (the barely legal-sized version was twenty bucks more). The top drawer is filled with artwork, original music scores, and every letter I've ever received by post. The second drawer contains instruction manuals for all the electronics in the house as well as news clippings, programs from concerts, Convocations, plays, weddings, et cetera. The next drawer down is filled with bills and invoices, and the bottom drawer contains oversized calendars dating back to 1993, as well as office supplies like envelopes.

Anything from before high school was preserved by my parents and passed down as part of their "the basement is full so let's get rid of this crap" ritual. The rest was all saved intentionally by me!

I cannot publish names, since neither one signed a release form, and that would open me up to lawsuits over the massive advertising profits I make on this site. However, I am still friends with both, and keep in semi-regular correspondence (one more than the other). Both were people from my undergraduate years -- the first circa 1998 and the second towards the end of my tenure.

I suppose that if I'm to update my 222 Things, I should also add one to this number! (awwwww)

If that is too personal to answer, how about this general question: how do you know when you're in love?

How long before you complete your world domination plans?

Below is a graph of visitors to the URI! Zone since November 1, 2003. As you can see, my plans for world domination are progressing nicely.

Pretty soon, I'll be able to move my roman numeral V markers out of North America and across the sea routes to neighbouring continents (because, as musicians knows, V is the dominant piece in the game of world domination), where I'll set up dictatorships in whirlwind coup d'etats.

Provide a detailed comparison of the relative merits of the fried chicken served by three major fast food chains, one of which must be Popeyes.

Conclusion: KFC may be a bit more convenient to my house, but Popeyes has a cheaper, and better-tasting, package when you consider the sides.