it's sixty degrees in November -- somebody screwed up 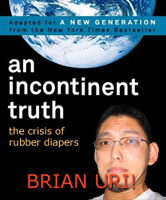 ♠ The high temperature over the weekend is supposed to be 66 degrees (Farenheit, you dirty Euros). This is completely unacceptable for a Fall season, and I may decide to sue someone. I guess there was some truth after all to Al Gore's claims of global warming. Luckily, I have a book ready to take advantage of his success.

♠ Since I generally spend 98% of my day behind a desk, in a car, or in my house, I first noticed the unseasonable mildness on Wednesday afternoon, when I was putting a spare tire on my car. I had to do this, you see, because I somehow managed to run over a giant hex bolt within fifty yards of my home on the way back from work.

♠ I'm not fibbing when I say the bolt was giant -- I would not have been surprised to learn that it sprang fully formed from Zeus' ass. The head of the bolt was a half inch across and the whole thing was over an inch long. The devious steel beast managed to inject itself into my tire, causing it to deflate faster than a partying frat boy who's just discovered that he's been flirting with a drag queen. As a result, I spent three hours on Thursday, wandering around Costco and eating at Friendly's, waiting for the Tire Shop to replace it under warranty. On the way home, I saw gas selling for over $3 a gallon.

♠ I've never understood all those gas stations that require you to pay in advance -- when I go to a gas station, I want to be efficient and fill up the tank. I honestly don't know exactly how much gas I'm going to want before I fill it up, and I definitely don't want to make a trip in beforehand to pay and a trip afterwards to collect the change.

♠ I always top off the tank so that the final amount works out to a multiple of five cents. This is a throwback to the days when I always bought gas with cash (and I hated pennies), because you don't know what those shifty gas stations will do with your card numbers. Now, I'm much more practical, and buy everything with my debit card, even Popeyes ($4.68 per week). 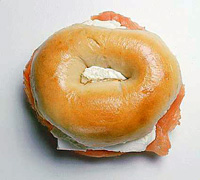 ♠ Actually, there IS one thing I don't pay with a card -- the Wednesday bagel at work. Every week, the local bagel guy drops off a batch of bagels for a dollar each. I burn through all my spare change on bagels (and steal change from Jack's office when I'm low, but it's okay because he eats my chips).

♠ I realize that I could probably bring my own bagel to work for much less than a dollar, which is why I load up on cream cheese. (That's where I make my dollar back).

♠ The bagel guy has drastically reduced the amount of cream cheese provided, which is where coming into work at 6 AM comes in handy. I am wholly to blame if the cream cheese block is reduced by 25% after a single visit.

♠ People are supposed to learn from their mistakes, but there's one mistake I have never learned from: every so often, I'll try buying the 1/3 fat Cream Cheese at the store, figuring that it'll be a much healthier, and taste reasonably similar to the real fatty thing. THIS IS A 100% INCORRECT CONCLUSION AND WOULD GIVE ME AN F IN CREAM CHEESE IF I WERE IN A CREAM CHEESE CLASS.

♠ Lite Cream Cheese is the worst. Normal cream cheese is wonderful though. I would marry a block of cream cheese and then eat it like a popsicle.

♠ Speaking of marriage, I heard from Nikki that Liz Benyo got married recently

. Congratulations to her! Liz Benyo was one of the two singers on my fifth year recital at Tech -- she never did like it when I called her "Liz B'o" though.

♠ This weekend, I have plans to play a little poker and do a little raking. My new computer is supposed to arrive at some point too, so I'll spend three or four days rebuilding it from the ground up to get rid of all the annoying shovelware they pre-install at the factory. My new Janny Wurts book is also arriving sometime soon by International Mail, so I'll be reading fantasy books and installing operating systems, like the Computer Scientist that I am at my core. "I want to cast MAGIC MISSILE!"

♠ Happy Birthday to Andrea Principe! Have a great weekend!