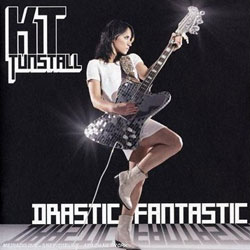 KT Tunstall's new CD, Drastic Fantastic, was released in September. Since her first CD, Eye to the Telescope, was one of my favourites, and stayed in my car CD player for months on end, I finally got around to picking it up. The CD arrived two weeks ago, and I also purchased the album as MP3s for $8.99

This particular CD is more acoustic and poppy than the original, but less acoustic than her aptly-named Acoustic Extravaganza. Weighing in at 39 minutes, it's a little on the short side, but the quality is quite high. Though the first couple listen-throughs were unimpressive, it quickly grew to be almost as catchy and enjoyable as the original. Below are a few song samples (greatly compressed) for your consideration.

The opening tune almost sounds like it should be crooned by Morrissey, and perpetuates two features of Tunstall's music that I enjoy: the back-and-forth between major and minor keys, and the ending of a song with a C section, rather than a repeat of the A section.

This particular song effectively highlights her accuracy of pitch. I've always been impressed with how her live voice is just as exacting and pretty as her recorded voice.

This is the song that was first released as a single which you've probably heard by now (It probably won't be long before it's in an iPod commercial). Some people compare it to Black Horse and Cherry Tree but I didn't like that song much. This one is far more interesting harmonically and rhythmically.

If the CD starts with a Morrissey tune, it's only fair that it has a Gin Blossoms-y tune too. Pleasant, harmless, and even channels a little bit of the Cardigans, which is never a bad thing.

This song highlights the lean away from blues and towards pop that permeates the entire CD.

A nice, mellow tune to showcase KT's lower register, which is just as rich as it was on her other CDs.

This song feels like it fell off of a Dave Matthews CD and landed here. It's not my favourite, but I would like it less if Dave sang it.

In my opinion, this is the only weak link on the CD, even though some people have said it's their favourite song. The tempo is a few clicks too slow, bordering near the "perpetual fermata" tempo that I hate, and she sings too many 9ths until they lodge in your brain like tiny machine gun pellets of timbre.

Final Grade: A- Give it a chance, and you'll end up loving it!

The man with tree roots for arms (warning: gross pictures)

Spy cat does a dead-drop every day