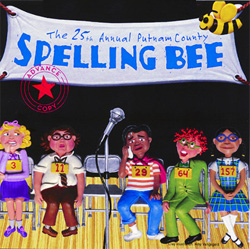 We went to see this "play with music" at the National Theatre last Saturday following a nice meal at the inexpensive Chef Geoff's around the corner. The 100 minute show is a parody of your typical televised spelling bee, with zany characters such as the antisocial nerd from TJ, the crazy home-schooled boy named Leaf, the perfect Asian who knows six languages, and the Boy Scout who gets an unfortunate erection in front of the audience.

There are no sweeping themes or French revolutions, but in this case, it's fine. The show never tries to be more than a nonstop barrage of one-liners and funny quips. Many of the quips are obviously improvised, since four of the contestants are randomly picked from the audience at show time, to compete against the six main characters. These ringers are given easy words until the plot needs to push forward, and then they're knocked out with impossible words (the losers are met by the "comfort counselor", a gang member doing community service who gives them a hug and a juice box before sending them home. Some of the funniest lines come from the Vice Principal's example sentences: "In the schoolyard, Billy protested that he wasn't cockeyed. 'I suffer from strabismus,' he said -- whereupon the bullies beat him harder." 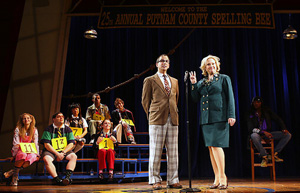 One of the ringers was a little boy who faced this exchange:

Vice Principal: Your word is 'cow'. [complaints from the other contestants]
Boy: Can I have the definition?
VP: [flabbergasted pause] The definition is "a cow".
Boy: Can you use it in a sentence?
VP: [disgusted] Your sentence is, "Please spell the word, cow." 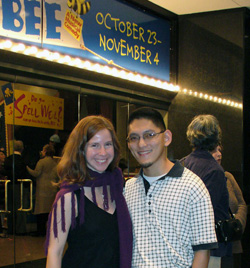 The set of the show was built to distort the perspective of the stage, which helped to make the actors seem much shorter (and more middle-school-like) than they really were (except for the Asian girl, who was in the lobby after the performance and really was only two feet tall). Unlike most shows, the musicians sat in the wings rather than the pit. The piano player who doubled as a conductor sat at an upright piano in the midst of the show like your favourite music teacher from grade school during an assembly. This greatly reduced phasing between the musicians and the singers.

For the most part, the music was fun but forgettable, with the parts between songs more entertaining than the songs. A couple songs (especially the last "My mom's in India" one) were completely unnecessary. Also, the accompaniment was mainly piano-based with occasional interjections from other instruments -- by the end of the show, the timbres felt overused and washed out (in the same way that the Les Mis orchestra loses its character by the last act, since every arrangement uses exactly the same instruments).

Some of the ensemble songs are impossible to understand because there's so much going on onstage, and every song by the actor who was supposed to be deaf was unintelligible, but otherwise the performances were solid across the board. You can listen to sample songs through Amazon's new MP3 store, which has become my new favourite way to purchase songs online

Final Rating: B+, a hilarious, but expensive show. If they ever release a DVD version, snatch it up.

Honestly, who couldn't tell it was a bug?

Teen escapes from prison in a suitcase