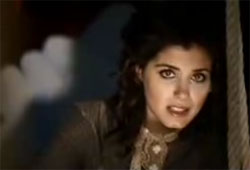 ♠ Newest in the series of "songs where you compare yourself with inanimate objects is Katie Melua's new single, If You Were a Sailboat

♠ When I first heard of Katie Melua, I kind of liked her music, but now it seems like every one of her songs sounds exactly the same -- sterile, emotionless, and slightly annoying in the timbre department. "If she were on TV, I would mute her."

♠ I've watched very little TV since I finished the first season of Heroes, but in the interim, I wrote three symphonies, discovered a home remedy for conjunctivitis, and built a spaceship for my cats.

♠ I haven't watched any of the second season of Heroes but I chuckled at this Superficial article:

♠ Last weekend, I raked my entire yard to keep the new grass from spoiling underneath the heavy leaf coverage. It was round one of about four in the annual fight against the leaves. The bad part about having a forest in the back yard is how many leaves fall, but this is counterbalanced by the fact that I can just dump all the leaves in the woods and pretend I'm one of those illegally dumping industrial plants. Since the first frost was just two nights ago, pretty soon I'll be able to move around some of my hibernating flowering plants in an attempt to appear as if I had a green thumb.

♠ It's a good thing that my roses and tulips essentially thrive on their own, because garden maintenance is one of the few things I never got around to picking up from my Dad. Usually, such secrets are passed down from father to son, as part of their floral tradition. 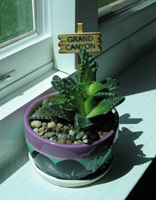 ♠ One plant which is doing surprisingly well is Pointy the Cactus, the spunky cactus Rebecca gave me six months ago from Colorado. After three months of feebly surviving indoors, I finally gave up and put him outside, where he was exposed to rainstorms and frigid temperatures. Ever since then, he's gone from being moldy and soggy to having multiple shoots and pricks -- this may or may not be false advertising. I'm not sure what I'll do when true Winter finally rolls around.

♠ Since Winter is almost here, I'll be putting up my blue-light-special Christmas lights soon. It's not truly Christmas unless the porch is festooned with blue lights like some homely edition of K-Mart.

♠ This weekend will be a mix of working, going to some far off land called Clarendon for Annie's birthday dinner, and the first of three "Month of Thanksgiving" dinners. Usually there would be four, but I was so wiped out on entertaining after the Halloween party that I preemptively cancelled the one that would have been last weekend in favour of sitting around my house setting up a computer.

♠ Happy Birthday to Vu today and Kelley Corbett on Sunday! Have a great weekend!

Bush agrees: You can't be president and head of the military

It's a Beer Emergency!