1) In my freshman year, I spent 100% of my time in class or in my room. I was one of those guys that always had the door shut. I roomed with a sax player named Andy who had dreams of being in Chip McNeill's jazz band and would spend hours practicing to Kenny G CDs on his soprano saxophone. Despite this, he was much cooler and more outgoing than I, and made it his life's purpose to turn me into a social animal. This mostly failed, but we were good friends. I lived in 5050 West AJ, and to this day, I use a variant of 5050 for passwords on unimportant things like work voice mail. No one except Anna leaves messages for me at work, so you should leave an after-hours message for me today: 703-885-1375.

2) In my sophomore year, I roomed with Beavis (the same famous Beavis who visits this site) in 3119 East AJ. This was the second year that AJ had a serial arsonist, resulting in nightly fire drills. I actually went outside for 100% of them. Beavis was cool because he lived in Maryland and often went home, meaning that carless BU could hitch frequent rides home to lust after his resident high school crush (who was but a junior -- how's THAT for being an old lecherous man?). Beavis also had to endure the three weeks where I bought a boxed set of Henry Mancini's complete works, and played dreary, depressing (but skillfully orchestrated) 70s music nonstop in the dorm room. 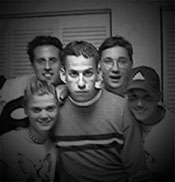 3) I only ever went to one college party that was actually broken up by the police. It was a trumpet "Pre-Social Social" in 1998 at the Foxridge apartment of one of our section leaders. Jason lived in one of those weird 4-person apartments that was actually two 2-person apartments with the wall torn out of the living rooms, so it had two kitchens. When the cops knocked on the door and asked, "Do you realize how much noise you guys are making?", drunk Jason replied, "Yes." The cop then proceeded to send everybody home, but didn't notice the entire contingent of freshman trumpet players hiding in the back bedroom. This was back in the day when older band members actually took care of their young'ns, making sure they didn't engage in a total alcohol transfusion or pass out on a highway. Technically, I didn't count as an older band member even though I was a junior, because I was still 18. Since I never drank and finally had a car, I often wound up playing chauffeur. This year, I inherited Beavis' old room, but got a new roommate,Nathan, a guy who I went to high school with.

4) In my fourth year, I lived with Kelley "When I was a freshman I drank a bottle of Everclear and showed up the next day at a football game still drunk with vomit on my Marching Virginians pants" Corbett in 3112 East AJ. I went outside for roughly 35% of our continuous fire drills, which was only slightly worse than my class attendance record for that year (and BETTER than my attendance record for the following year). This was the year that Delta Mu, the non-service music fraternity was in its prime (until they took it wayyy too far and had Greek T-shirts made for it, thus turning themselves into the very tools they were mocking), and we spent many nights at Jason "Best Meat" Chrisley's palatial lakeside home in Pulaski (his parents were butcher millionaires who owned gas stations or something) jumping on trampolines and paddling around the lake (I also remember making out with a girl on the shore of this lake in the dead of winter in two feet of snow -- good times). Jason "Best Meat" Chrisley was called "Best Meat" because his parents were butcher millionaires (see above) and he could supposedly make the greatest steaks in the world. We often challenged him to this task because he got the steaks for free, and who wouldn't do something shallow like that to get free steak? By the way, Dave McGarry, the guy who donated his initials to Delta Mu is still making music with his band, Preston Grey. Check them out sometime 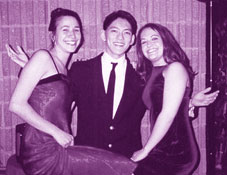 5) In my last year at Tech, 2000-2001, the fire drills of Ambler Johnston finally defeated me and I moved off campus with two hot chicks, Rosie and Anna. Actually, it was originally supposed to be Rosie and Jen, but women always have some sort of drama going on. They were already roommates beforehand and got in a big spat about nothing so Jen got voted off the apartment (and eventually moved into Foxridge in the building next door to us). Since it would have been weird with just Rosie and me in an apartment, we preyed upon the naive and innocent freshman, Anna, to round out our triumvirate of doom. Anna was floored that upperclassmen would want anything to do with her newbie ass, so she agreed immediately, though I'm sure her mother had something to say about moving in with a seedy, disrespectable fellow such as myself. I remember that Shac would constantly ask me what living with two girls was like and whether "they walked around in towels after they took showers". This is also when we got Kitty, who converted Rosie "I'm a total dog person" Pereira into a cat-lover after falling asleep on her back while she did homework.

It's fun to put quoted phrases in the middle of peoples' names.

B- if you don't show up for class

When your love just burns a little too strongly