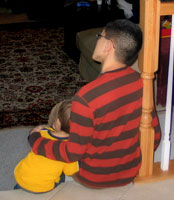 On Saturday night, we went out to Winchester for a surprise going-away party for Vu, who left yesterday for a new job and funner friends in San Francisco. Anna made a tort and I made my patented "going-away" chocolate chip cookies in a colourful "going-away" bowl. The extended Spellerberg clan was there, and children and small animals flocked to me like I was the Pied Piper. You can see pictures from the party on the Photos page 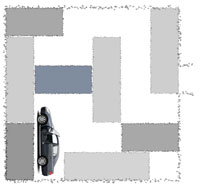 On Sunday night, Kim and I drove into D.C. to see the final tour of Les Miserables at the National Theatre where we met up with Ben & Anna and Ben's mother. The show was great, but the performances weren't quite as good as they were four years ago. I'll write about the actual show tomorrow -- today's update will remain completely extramusical. We parked in a seedy parking garage on 13th Street where the number of support columns exceeded the number of parking spaces by two-to-one, to the point where it felt like I was playing a giant game of Gridlock

or maybe a macabre round of Tetris while parking.

Parking was a flat $11 fee, and the attendant kindly told me that one of my headlights was out (so apparently I've been that annoying guy in your rear view mirror with one headlight for about a week). This is part of the matching ensemble with my driver's side window, which does not roll down in the winter, but works again every spring, forcing me to open the door to get parking garage tickets or scare Department of Defense gate guards when I pull up for my interviews. My parents always swore by the Metro, but to me, it's really not that much more expensive to drive into the city and control your own schedule -- I feel like the time I save standing on a windy platform waiting for the one Blue Line train to amble into the station is worth the couple extra bucks I'd pay for parking.

This isn't to say that I like driving in the city -- only that it's not quite annoying enough to avoid. I dislike the fact that all the lights are on the corners looking more like festive decorations than signals, or the pedestrians that start waddling into the intersection with two seconds left on the clock. This will not get you better field position for a game-winning field goal -- you will just get honked at and possibly die. On the way out of the city, we drove past multiple cars who were riding the white line like it was a new Metro rail. I half expected to see those little amusement park rail huggers on the bottoms of their cars, but they were just drunk, high, or sleeping for the most part

During the show (which we had a great field position for), there were a massive number of camera phones out. One guy across the aisle took a picture of every single scene in the musical, and an usher finally came down and told him not to in the last scene. The old guy right behind us took a picture in the quiet, moving silence following the death of the main character at the end of the musical, which just felt very fitting for D.C. After that, he started humming a tritone off-key during "Do You Hear the People Sing?" but I think he was just trying to help us get the right answer to that question.

I developed a tickle in my throat seconds before the curtain opened on the second half, and struggled mightily to not be that guy who coughs through the performance. Luckily any coughing I might have leaked out was drowned out by the lady with the velcro purse full of sweets one row back.

Never trust someone who says "Thanks, I made it myself".