I can assert with virtual confidence that I am no longer a spreader of disease and my cough has gone away for good, so they can finally remove me from the terrorist deck of playing cards where I was third in command of the clubs suit (Queen of Clubs was the girl that licks everything from the anti-smoking ad and King was Mike's Futon of Death). It only took three weeks for the cough to stop, fast enough for me to enter February with a healthy, clean outlook, but not so fast that it didn't annoy me during my weekend plans o' fun.

After the past returned to haunt me in the form of prepackaged frozen pizzas on Saturday, I took a trip out to Fake Alexandria, which is the area of Fairfax County south of the Beltway also known as Hybla Valley, where the low-class county trash preys on the City of Alexandria's good name and reputation. While there, I was forcibly involved in an afternoon caper that included a flaming car, multiple police officers, and a very tasty doughnut. Sadly though, I promised not to reveal any further details, but the tale is interesting enough that I think Kim should post a full disclosure the next time she's run out of blog ideas.

Three hours and seventy miles on the odometer later, we were eating dinner at the Bennigan's in Springfield Mall, which was apparently having a Commodores, Guns n' Roses, Bon Jovi lovefest, playing classics back to back throughout the night. I ate a sliced jalapeno pepper and peed in the nastiest bathroom ever found outside of a gas station -- even the Queen of Clubs would think twice about licking that bathroom floor, as I think there were multiple new species of life gestating in and around the sink area. 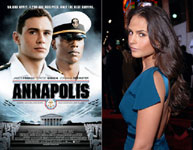 From there, we moseyed down the thoroughfare to the theatre for a showing of Annapolis which came with a free side of hoody high school kids making comments at the screen. My ticket was only $7, since I'm a bona fide student of the Florida State University where I have been working on my doctorate by correspondence for the past three years. The movie was entertaining but mostly silly -- a better title might have been Rocky Goes to the Academy, since the Naval Academy is only used as a back drop for a boxing / coming-of-age story. Most of the movie consisted of deep and meaningful lines of dialogue taken from better movies and James Franco frowning while trying hard not to turn into the Green Goblin.

In fact, the only things I learned about the Naval Academy from the film was that there is only one attractive female on the entire campus, but she will be a year ahead of you so you can't kiss her without being kicked out, and if you lie about taking a shower you'll get kicked out, and if you're fat and eat junk food you'll get kicked out. BUT you can punch a visiting Marine officer twice without provocation and he'll let you advance to the boxing finals instead of kicking your insubordinate ass out. They say that the reason the entire film was shot in Philadelphia was because the Academy and Annapolis didn't support the movie, and I can see why -- as a patriotic recruiting movie, it's not really that good. I think it would have been more successful in luring young, inexperienced high-school graduates to service if they had added a storyline where the Navy clones an entire battalion of Jordana Brewsters and they all fall madly in love with the incoming plebe class.

It will be interesting to see if President Bush includes this "Hot Clone" initiative in tonight's State of the Union address. If he's going to preempt higher quality television like Scrubs and House for twenty minutes of empty rhetoric and eighty minutes of clapper-ass clappers, then the least he could do is to introduce a nucular stem-cell cloning technique that creates hotties. It would be a definite step towards world peace.

Fear of Girls: The Documentary

Get men to diet groups with sex and pizza