Are these news stories real or fake? Decide which one(s) are pure invention, and then reveal the hidden text at the bottom to see if you are right. Regular readers of the Washington Post are disqualified from this contest because that's like insider trading, and we're all honest 'round these parts.

A committee appointed by D.C. Council member Marion Barry has moved the District's annual Martin Luther King Jr. parade from its traditional date near King's birthday in wintry January to the warmer month of April, when the civil rights leader was assassinated. Last year, days after Barry was hospitalized for flulike symptoms, the parade was canceled at the last minute because of plunging temperatures. Aside from the disrespectful symbolism of remembering King on April Fool's Day, one activist said, it makes no sense to hold a parade that marks King's murder. A member of the parade committee said the committee discussed April 1 without realizing that it was April Fool's Day.

D.C. Council member and former mayor Marion Barry yesterday urged two young men who robbed him at gunpoint Monday night to turn themselves in to police, promising that he would urge authorities not to prosecute them. "I have no animosities," Barry declared. "I don't even want you prosecuted, really. I love you. Give yourself up. Call the police... I will do all I can to advocate non-prosecution. There is a sort of an unwritten code in Washington, among the underworld and the hustlers and these other guys, that I am their friend," Barry said.

Congressman Moran has a Hectic Birthday
Lloyd Grove, "Reliable Source" columnist for the Washington Post, reported that Congressman Jim Moran's (D-Va) house was the site of "a ruckus that a witness described as 'something out of a Jerry Springer episode.'" According to Grove's account, a female friend of Moran visited the divorced congressman and was surprised to find two others, and after screaming and door slamming, Moran had one of the women "by the arm, trying to get her out of the house." Moran's chief of staff, Paul Reagan, explained: "It was just three very good friends who came to give him birthday presents and were surprised that the others were there." Moran has come under fire in the past for suggesting that the Jewish community was responsible for the war in Iraq. 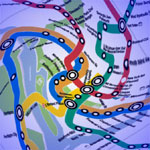 Worried that commuters have turned a deaf ear to the recording that warns when a train is about to pull out of a station, Metro officials plan to record a new message this year and are searching for new talent. The three tones that would-be stars are asked to use are polite, authoritative and serious (Nothing jokey, nothing warm and fuzzy). The winner doesn't get a professional recording contract, a concert tour, or even a free ride on Metro, but will be heard throughout Washington D.C. saying "Doors Opening" and "Doors Closing". A text consultant for the Shakespeare Theatre said candidates should remember the first rule of speech: clarity. "You want to be able to understand the messages, and the trick with that is to let it sound human".

The following were among cases handled recently by the Washington Humane Society:

In Strange Reversal, Condom Discovered in Nut
Consider it a modern-day twist on the story of the Trojan horse. When Diane Geist brought home some mixed nuts from Walmart, it turns out one of the shells was concealing a condom. Geist said she could understand Wal-Mart being skeptical. "I'll baggie up the evidence and run it down there," she said. Store representatives expressed surprise at a condom being able to fit into the relatively small shell of a hazelnut. Geist agreed it was a tight fit. As for the rest of the nuts she had bought? "My husband finished them off," Geist said.

Highlight this empty spot for the answers:
The story about Jim Moran is a falsehood -- this incident actually happened in 2001 BUT there were only two women, not three.

How did you do?

Homeless get 15 glasses of wine per day. Three of the 17 participants died during the program, succumbing to alcohol-related illnesses that might have killed them anyway, the study said.

Jon Stewart to host the Oscars