On Saturday morning, I made my annual pilgrimage to the real brick n' mortar book store to buy a wall calendar for 2006. Border's had a horrible selection this year so I got a calendar full of llamas for a multitude of reasons:

I guess the last point doesn't matter so much in the grand scheme of things since it was my party and I bought the gift certificates, but I've learned that you should take every opportunity you get to feel frugal (rightly deserved or not), because then you can hemorrhage cash without guilt later on.

Now, Why Cats Paint of 2005 has been relegated to the file cabinet with all the other old calendars. I seem to have kept every calendar since 1992, except for 1994. Maybe this was a subconcious note to self that 1994 was my junior year and sucked enough to not be worth remembering. As you can see from the picture above, my tastes have changed throughout the years (the Virginia and Antique Maps calendars were gifts though, so they don't count). The only big difference in calendars of yesteryear is that I actually used them to remember dates and wild parties and the like. In 1993, there's some kind of event on practically every day of the month. In contrast, my 2005 calendar has one day per month filled in with "PAY MORTGAGE". 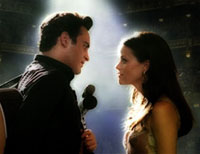 This weekend, I also saw Walk the Line with Kim, who had seen it once before and thought it was see-worthy again. Plots for movies like these are always the same: guy has talent, guy does drugs, guy is in a bad way, guy redeems himself. Generally movie biographies don't interest me -- I watched the first half of Ray and got bored enough to turn it off. However, I ended up liking this movie, probably because of the music and the performances of Jokin Phoenix and Reese Witherspoon. They were able to fully become their characters for these roles, and I rarely ever felt that I was watching a movie star play a role. They also had impressive singing voices as well -- I would buy their albums. Sadly though, I have to admit that I did not know a single Johnny Cash song going into this movie, even Ring of Fire which I was assured that "everybody knows". Bottom Line: A+ movie, would watch a movie with these actors again.

Tip of the Day: Don't flee a bank robbery with a personalized license plate.

If you ever tried to ski when you're wasted, it's not easy