It was just this weekend that I finally wrote "2006" on a check without thinking about it, rather than writing "2005" first and then using creatively curvy lines to give the 5 a sex change (sex is German for six, you see). I like the fact that I was born in 1979, because then the last digit of my age syncs up with the year we're currently in 75% of the time, so I'm not as likely to forget that I am, indeed, 26 and not 25. 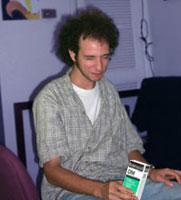 I've done a lot of adult activities in the past three years, from buying a house, and starting (then ignoring) a 401k, to designing and decorating rooms with gauzy curtains and walnut shelves backhoes and NASCAR photos. However, I didn't truly feel like an adult until Friday afternoon when I poured myself two teaspoons of Robitussin DM, swigged it down without hesitation, didn't grimace, and didn't require a chaser to evade the taste. Voluntarily drinking cough medicine and not minding the flavour -- how much more adult can I possibly get? There was a time when I'd rather stay sick than take any kind of medications (except for citrus-flavoured Dayquil, which is historically tasty).

I'm sure I'll revisit my level of adultery once I have kids, but that's a good three months away, at least. In the meantime, I'll just wait for my sister, or Anna & Ben, or any one of my many married or soon-to-be-married friends to start popping out the pipsqueaks so I can be the jovial uncle figure that swoops into town on holidays and spoils the kids rotten because they're not his own, and tells them that the sun sets in the west because of the big magnetic tractor beam in San Francisco. How cute would it be, for example, if there were a Kelley Jr., and it was a girl?

In a double whammy of an adult wake-up call, I also got called for jury duty on February 6 (my first tour of public service for the people of the United States). To prepare for this, I've been diligently rereading Runaway Jury by John Grisham, since it seems to be representative of the way you serve on juries. Maybe if I bring a bottle of cough syrup as a beverage, the prosecution will be unnerved enough to dismiss me with one day served and $30 in my pocket. Then I can blow that cash at one of those Hispanic brothels that are always in the news these days and call it a day.

Job fair turns out to be massive ID theft scam

Gays not welcome at the egg roll