I signed up for spring classes yesterday. I'm planning on taking eleven credits-worth: Composition lessons, Pedagogy of Music Theory II, History of Jazz 1950-Present, and Fugal Writing Styles. I was a little disappointed that Dr. Spencer doesn't teach the second portion of Pedagogy, but I made up for it by taking Fugal Writing (which covers an elective requirement anyhow). He's a sharp teacher, and his dry wit makes classes interesting as well. I'll do better in History of Jazz than History of Music Theory, because I'm much more interested in the subject matter.

P.S. The Hokies are ranked 5th in the BCS.

"The 'whatever' will hit the fan, and we need to make sure the fan is running very slowly when that happens." - professor on the pitfalls of overexplaining figured bass symbols in basic theory classes

A "Composition Challenge" has been added to the SCI website, in an effort to entertain composers and their offspring. Go check it out if you're in the mood to write against a motive. On a sidenote, I'll try to limit the crossposting of news after that site has an audience, but until more people than myself and Jim Barry visit, I'll whore out this news page to get new faces over there

Next semester I may be taking as many as seven credits of Independent Study to stay in the assistantship game. I'll probably continue doing Fundamentals software work as a D.I.S. while teaching a class or something like that.

I've uploaded a new edition of Caravan Assault on the Games page, with greatly improved gameplay and balance. Check it out.

In my spare time, I'm working on creating a PHP/SQL forum for the URI! Zone. If this site had a forum, what sort of features would you want to see?

Tag Day: Soundtrack of Our Lives 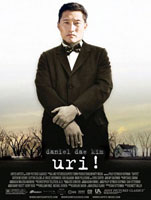 I borrowed today's idea from a bulletin that Anna answered on MySpace, the world's most poorly designed social networking site. Simply load your entire playlist on your favourite music-playing device (be it an iPod, WinAMP, your 99-disc CD changer, or a comely soprano named Katya) and hit the Shuffle button. Then, use the shuffled playlist make the soundtrack for the movie of your life, using the life events in the table below. The choices Shuffle bestows upon your life will range the gamut from completely nonsensical to eerily perfect.

, so creating the soundtrack is the logical next step. I now tag Mike

. The running commentary is unnecessary -- feel free to just do the column where you shuffle your playlist if you are feeling lazy.

On another note, new cat pictures were added here

(scroll down) and new weekend pictures were put here

Worst 20 video games of all time

or "how I stumbled upon the URI! Zone"

Here is the most recent collection of weird search terms for the site. Though the original searchers may have left feeling unfulfilled, future searchers will no doubt be satisfied by my attempts to providing meaningful results.

See pictures from our Honeymoon


The official wedding pictures should be uploaded in the next couple of weeks!

Between 1994 and 2002, jazz was the primary type of music I listened to. I was that annoying kid that had 90.1 FM blaring in the car until they ran out of money and stopped playing jazz before 11 PM. I own at least twelve CDs by the Stan Kenton Orchestra, and stayed home learning the chord changes to Eager Beaver while all of the other high school senior boys were searching for eager beavers of their own. 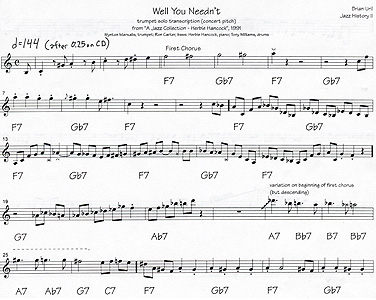 I lost some of my interest in college, after multiple semesters of failed jazz band auditions while watching some obliviously horrible trumpeters make the cut -- apparently Chip McNeill was not a fan of my mellow tones. He did, however, teach me one important lesson: always take courses taught by the jazz faculty, because they're never in town to have class. Numerous jazz arranging classes and studio labs became easy As on the transcript, and all I had to do was show up to find the cancellation note on the door (jazz musicians don't dig email).

This lesson stuck with me in grad school when, for some peculiar reason, I had to fulfill a Masters requirement with a survey level music appreciation class. I ended up in Jazz History II, a lecture course full of uninterested freshman that only met about 50% of the time because Leon Anderson was always touring.

Our final assignment was to listen to a CD of an improvised jazz solo and transcribe it to the best of our abilities. Curious to see if I could still follow the changes, I picked the fastest solo I had in my CD collection, Wynton Marsalis playing Well You Needn't with Herbie Hancock:

I will always treasure the comments I received on my assignment: 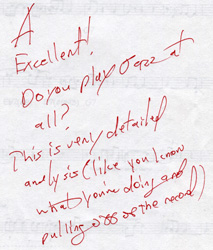 When I resume my trumpeting career, and open at the Montreal Jazz Festival, the copy on my poster will read: "Internationally acclaimed trumpeter, Brian Uri!: It's like he knows what he's doing and he's pulling it off."

Up to that point, I had purchased all of my music through Walmart, which required the extra step of converting their DRM-draped Windows audio files into MP3s.

Amazon has always had a nice set up for MP3 orders, including the cloud player to keep track of songs after I've deleted them locally. They toss enough coupons out at regular intervals that you can usually get a song or two per month for free, and they now offer free digital downloads with real album purchases.

I tried iTunes once, but uninstalled it immediately after it added multiple extra Apple background services to my machine. Ain't no one got CPUs for that. 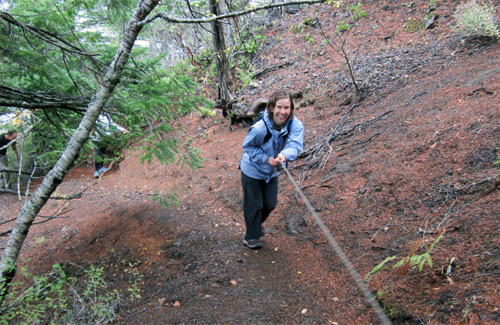 I'm a fairly lenient grader, as can be seen by the fact that I've only given out eight Fs in over a decade of Review Days.

On Friday, the first day of our now-regular three-day weekends, we drove down to Fredericksburg to visit with the Ahlbins and their freshly baptized one-month old, Felicity. With a partial tally of sisters and their children present, there were a total of 17 people under the age of 18 present -- had they chosen to overpower the adults and set up their own government, they probably would have succeeded. 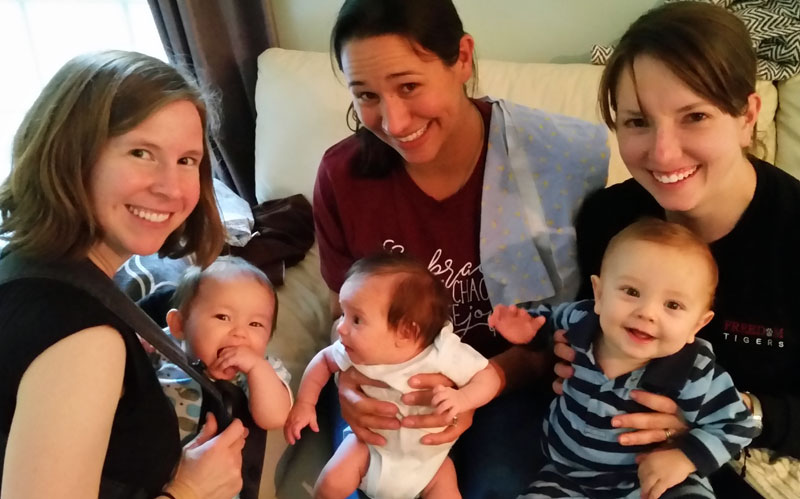 Maia had a good time observing the tornado of children, as the scenery at our house is much more placid. We stayed through the evening on Saturday and then made it up I-95 to get home in a surprisingly rapid fashion.

On Sunday, Rebecca taught a lesson on anatomy at a yoga teacher training session through her studio while Maia learned the ins and outs of napping. In the evening, we took a nature walk through Claude Moore, then had a successful dinner at Cafesano -- Maia is pretty good at enduring fast-casual outings but we have not been brave enough to try waiter-style yet. 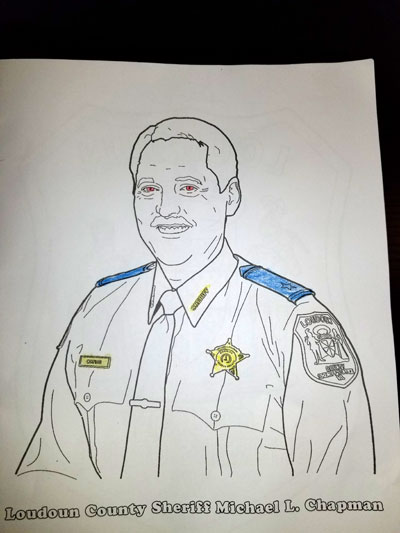 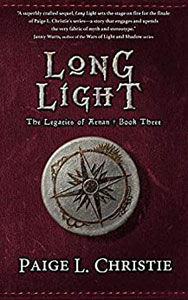 Long Light is Book Three of the four-book series, Legacies of Arnan, by Paige L. Christie (I also reviewed Book One and Book Two). This story decisively belongs to Kilras, who was easily my favourite supporting character in the previous books. We learn (in a mostly sequential manner) of his growth from a child in a specific village to the empathetic caravan master that eventually befriends Cleod.

It would be too easy to dismiss it as "just a prequel" (in spite of the vexing fact that Book Three ends without any closure about the climax of Book Two) -- Kilras' journeys across Arnan also serve to introduce new people, customs, and factions that have only been hinted at. This adds some "epicness" to the consequences of Leiel's, Cleod's, and Kilras' decisions and breaks away from the mostly-regional perspective we've been given so far.

This broadening device reminded me a little of the recalibration required with Janny Wurt's Wars of Light and Shadows, where everything we learn in previous books has a deeper interpretation as the camera steadily pulls away from the seemingly simple tropes introduced at the beginning. I expect that future rereads of the Legacies of Arnan series will be just as rewarding.

Long Light is structured very similarly to Wing Wind, with an emphasis on one character's evolution instead of the future-facing plot. I wondered why I devoured Kilras' story so quickly yet struggled when the same structure was applied to Leiel in Book Two, and came to two conclusions: (1) Kilras remained enigmatic enough in the early books to have a lot of blank canvas to cover here and (2) Kilras' introspective musings are swirled into a revolving backdrop of interesting cities and situations, while Leiel's growth was more contained to a single location, so it was often the only thing happening for pages.

The bottom line: Book Three worked completely for me. I enjoyed the journey to this point enough that the forthcoming conclusion, Storm Forged, will definitely be a release-day purchase.