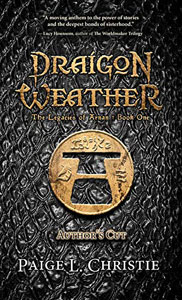 Draigon Weather is Book One of the four-book series, Legacies of Arnan, by Paige L. Christie. The story takes place in a land where rare visits from giant Draigons can cause droughts, fires, and unpredictable weather. The fearful populace have learned that the sacrifice of a woman will appease a Draigon for at least a generation. This setup allows the author to expertly turn the "damsel in distress" trope on its ear.

While the plot spans decades, the heart of the story centers on two childhood friends, Leiel and Cleod, and how a singular traumatic event sets them on very different paths. The two points-of-view are equally enjoyable and serve to develop the characters towards a reunion that I found very powerful and rewarding. This is much more than a simple coming-of-age story: it features strong, competent characters that truly grow over the course of the book, which I found refreshing after so many books where immature characters only grow up by leaving a string of failures and mistakes in their wakes.

"There are no beginnings. There are only starting places in the middle of longer tales."

The book bounces back and forth in time rather violently upfront, but soon settles into a rhythm where several consecutive chapters stay in the same period. I was surprised by how effective the splintered timeline was. Generally, techniques like this fail to excite because too much emphasis is on concealing or overhyping the key event that separates past from future (see almost any J.J. Abrams-directed show that jumps back 24 hours). Here, the time jumps succeed not because of cheap tricks or late-game reveals, but because I was wholly invested in the characters and wanted to explore every inch of their stories, even when already telegraphed several chapters earlier.

I enjoyed the generally uplifting tone of the story and its themes. The characters struggle and face tragic circumstances, but there is always a maudlin thread of hope running through the proceedings. Relationships with supporting characters (like Kilras and Torrin) aren't given a short shrift -- if anything, they left me wanting to read more about them. Even minor characters who behave despicably are developed enough to have a reason for their depravity.

All of these aspects serve to make Draigon Weather a very strong start to the series (I immediately purchased Book 2, Wing Wind, after finishing). Read this for its well-developed characters worth rooting for, its direct, powerful prose, and its ability to erase the line between history, backstory, and the parts of the story you're "supposed" to care about.