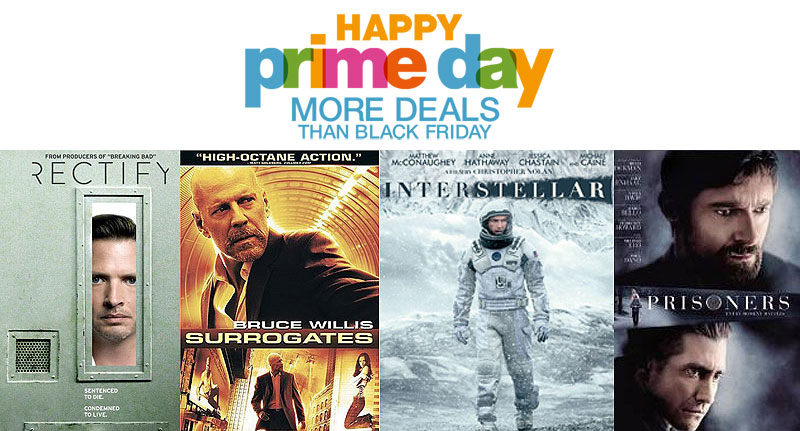 Prime Day:
Amazon's big 20th Anniversary sale was a huge bust. Deals were split across confusingly named categories with the same poor site navigation that prevents me from ever discovering interesting Kindle books to buy. It was difficult to see deals that were coming more than a couple hours in advance unless you camped on the site all day long, and the deals that were there were all one-offs to things that would have actually been worthwhile: An iPhone! (case) A tablet! (stand) A giant bottle of WHEY! I was prepared to spend tons of unnecessary cash on fun things I probably would never have needed or purchased in a fiscally responsible WHEY! but I walked away completely empty-handed. It was like going to a college job fair solely for the free snacks, and then finding out that you're getting Hydrox and Lipton Diet Green Tea. What a failure.

Rectify, Season One:
This drama from the Sundance Channel (which I didn't even know was a real channel) appeared with little fanfare on Netflix, and tells the story of a convicted murderer who's freed on DNA evidence after 20 years spent in prison. The pacing is slow but methodical, yet it kept my interest much more than Bloodline did. I also appreciated the relative murkiness surrounding the original crime, which gives you the space to come to your own conclusions about the characters and circumstances -- had this show aired on Fox, it'd probably be filled to the brim with unnecessary flashbacks to the ancient violence. Free on Netflix.

Surrogates (PG-13):
One of my jobs while Rebecca hikes everywhere has been to watch all of the movies she probably wouldn't care about missing. Bruce Willis stars in this movie about a future where everyone lives their daily lives through robot avatars, "surries", and have forgotten how to interact with real life. It's brief, entertaining, and raises some interesting questions to muse upon in the shower.

Interstellar (PG-13):
I liked this movie far more than I expected I would, and even watched it again with Rebecca who gave it two thumbs up. The internal consistency of the plot is impeccable, with every scene from the beginning lending weight to the resolution, although I did feel like the denouement felt a little silly and too full of exposition when compared to how effectively the rest of the movie was paced and crafted. The movie is almost 3 hours long but didn't necessarily feel long -- although they could have trimmed about 20 minutes of Anne Hathaway sitting in a spaceship reacting to gravity by grunting and leaning to the right.

Prisoners (R):
This was a great movie, in spite of the fact that Jake Gyllenhaal looks like he's channeling George Washington (or Inspector Javert) on the cover. However, it's unrelentingly grim, starting from an unsettling place and building in intensity and creepiness without pause. The plot focuses in the disappearance of two little girls, and the mentally handicapped adult that may have been involved. Clues are intricately worked into the plot, and the ending is satisfying and consistent without relying on any M. Night caliber plot twists. I was able to figure out a few pieces of the puzzle early on, but this did not diminish my enjoyment of the ending when all of the loose ends finally came together.