paving the way to the future with straw and hippo spoor 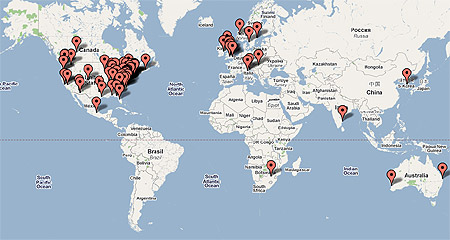 ♠ As you can see from the visitor map on the right, the popularity of the URI! Zone is starting to resemble the early stages of an avian flu pandemic, although I've had trouble penetrating the South American markets. The African and Asian hits, as well as most of the Eastern European hits can be safely ignored since they usually just want to steal my musical research.

♠ I'm perfectly happy to be past the stage in my life where I have to read treatises of questionable merit and write papers about them. Nowadays, most of my writing is either for this website or for design specifications at work that show how alien autopsies can be made more efficient through the use of ample lengths of dental floss. I also use a good deal of my Written Word sauce on support emails to users who name their resources "PLOP" and want to change them, or click on an advertisement instead of the login button and then complain that our website is broken.

♠ Speaking of broken websites, my site was down for a few hours yesterday morning because of a power supply failure. Since the host is on the West Coast, it didn't get fixed immediately, but we were back up and running once the admins woke up. Kattare is much better than Futurepoint in that regard -- on my old host I would have spent several days waiting to get a reply back from Bob in India before sending him detailed instructions on how to fix the problem.

♠ The above fragment is not a racist rant -- the level one tech support guy was actually from India, and said his name was "Bob". I'm presuming that the purpose of such an all-American name was to comfort the Americans asking for support, but the ruse is shattered when you also say that you're on New Delhi time. 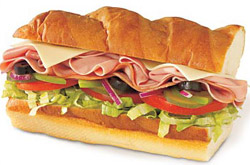 ♠ It would be nice if there were a new deli around here. I am not elite enough to eat at a Panera, and Subway has been kind of bland for a while now. I think it's probably the result of renaming their Cold Cut Trio as a Cold Cut Combo. Any musician could tell you that it's never smart to add more people to your ensemble -- hilarity will not ensue.

♠ I'm not a Quiznos fan either, but not based on the quality of their foodstuffs. Any company that thinks babies that talk like adults are a clever marketing strategy don't deserve my business. The same goes for that stock-trading company that only seems to advertise during Super Bowls.

♠ I don't have any big plans for the weekend, although I'll probably start watching the fourth season of Prison Break or coding Weddingopoly as an online game on our wedding website. I'm also replaying Mario and Luigi: Partners in Time on the DS Lite. It's just as fun as the first time, and is easily one of my top video game picks.

♠ Happy Birthday, Rob! Have a great weekend, everyone!

First Zero-G wedding (for only 10Gs)