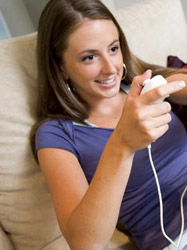 Known for making adrenaline-pumping action games for young men, video game companies now are getting in touch with their feminine side. Why? Because it's a lucrative and relatively untapped market.

What game publishers still fail to realize is that a good game is always a good game -- making girl games with themes presumed to be girly will probably do more to insult than to attract.

Video games for girls today fall into two main categories. There are "pet/nurturing games" like EA's "Littlest Pet Shop" [...] and there are "fashion/style type games" like Ubisoft's "Imagine" franchise. "These are two classic play patterns for girls of this age," [analyst Anita] Frazier said. "I'm hoping with greater experience with this market that the publishers are able to branch out and find other themes of games to appeal to girls."

Focus group studies have unearthed two additional themes for which games are under development now -- "twilight games" where young girls can make out inappropriately with vampires, and "gossip/backstabbing games" where girls can come home from middle school and relive the entire day on their computers. The "math/science games" were nixed by upper management in favour of a seventh game where you can virtually comb the tail of a pony.

Ubisoft is adding a third girls brand this fall with Style Lab. It's targeting 8- to 12-year-old girls, known as "tweens" because they are between childhood and adolescence. Style Lab games [...] will focus on makeovers and jewelry design.

Unfortunately for Ubisoft, the World of Warcraft monopolized these areas long ago when it introduced the barber shop and jewelcrafting. When asked, Ubisoft dismissed the competition, noting that Style Lab was merely a cheap hook to draw tweens into a complete world of age-appropriate Lab games as they get older. Date Lab (rated Everyone 10+ by the ESRB) and Meth Lab (rated T for Teen) will be released next, and by the time the girls become adults, they'll be able to play Infidelity Lab and Plastic Surgeon's Lab.

Electronic Arts is pursuing tween girls with its "Charm Girls Club," set for release in October.

Only in an article about marketing could you use the phrase, "pursuing tween girls", and not raise any suspicions.

The publisher sees "Charm Girls Club" as a social game that girls can play when they get together at home. It's being developed for Nintendo's market-leading Wii console with its motion-sensing controllers. "It's designed to make the girls have an absolute ball at a sleepover party," Key said. 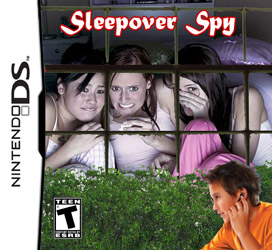 In other news, Al Lowe (of Leisure Suit Larry fame) has stated his intention to create a video game for boys in which they can spy on Wiimote-toting girls having an absolute ball at sleepovers. Preorders in Japan are already at record highs.

One reason that game publishers like girl games is because they're cheaper and quicker to develop than male-oriented action games. "It's a good margin business," Key said. "The games are not expensive to make. The money is actually spent on the marketing side."

Other highly successful products characterized by exorbitant marketing budgets with very little spent on design or development include American Idol, The Matrix parts 2 and 3, and the Republican Party.

By comparison, a title like Ubisoft's "Splinter Cell" or "Assassin's Creed" can take two or three years to create, with large teams of 100 or 200 software developers.

The bigger-and-better approach has also given us such classics as Daikatana and Dukem Nukem Forever.